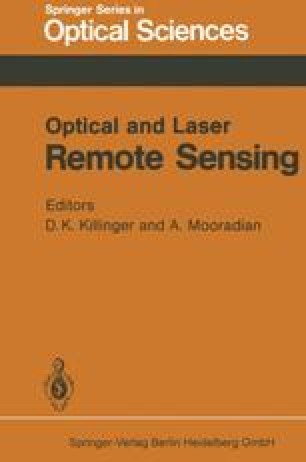 The capability of a Fourier Transform Spectrometer (FTS) system to detect and characterize trace gases in a localized cloud, such as the effluent from a stationary source, is discussed in this paper. An FTS sensor with imaging capability can measure the spectrum of the spatial contrast produced by the cloud (Figure 1). Of course, the cloud temperature must be different from the background brightness temperature (higher or lower), and the resultant spatial contrast must be distinguishable from background clutter. The contrast can be measured by simply subtracting the signals measured in different pixels, or by the Background Optical Suppression Scheme (BOSS) described in Part II.

Background Suppression Entrance Aperture Fourier Transform Spectrometer Spatial Contrast Minimum Detectable Quantity
These keywords were added by machine and not by the authors. This process is experimental and the keywords may be updated as the learning algorithm improves.
This is a preview of subscription content, log in to check access.