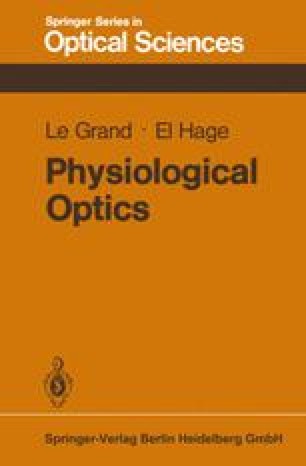 Optics of the Eye

Leonardo da Vinci (1452–1519) rediscovered the camera obscura (mentioned by Ibn al Haitam as early as 1038) after he noticed the inverted image of objects formed on the wall opposite a window by which light entered a dark room through a hole in a window shutter and assumed that this phenomenon occurred in the same manner in the cavity of the eye. Maurolycus (1575) compared the crystalline lens to a glass lens causing the convergence of rays. He disagreed that the image was inverted. If this were the case, he said, we would see everything upside down. Kepler (1602) admitted that there was such an inversion: he said it is “the experience and the activity of the soul” that re-inverts the image. The cornea and the crystalline lens refract the rays; for vision to be clear, the focal image must be situated on the retina. Father Scheiner, a Jesuit (1619), assumed that the refractive indices of the aqueous homor and of the crystalline lens were those of water and of glass, respectively. By cutting away a piece of the sclera and choroid in an animal eye, he verified that the image was indeed formed on the retina, and inverted. Helmholtz’s ophthalmoscope allowed direct observation on the living subject, to see how the retinal image is formed, to see how its sharpness is a condition of distinct vision, and to see how the image of the point of fixation falls on the center of the fovea (at least in daylight vision).

Aqueous Humor Retinal Image Anterior Surface Effective Index Posterior Surface
These keywords were added by machine and not by the authors. This process is experimental and the keywords may be updated as the learning algorithm improves.
This is a preview of subscription content, log in to check access.