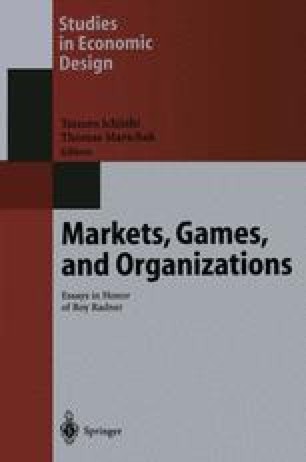 Survival and the art of profit maximization

We study the relationship between rationality and economic survival in a simple dynamic model, where agents from different populations interact repeatedly through random matching. An explicit criterion (“bankruptcy”) determines whether agents survive each interaction; all agents are presumed to be aware of this criterion. Survival in each interaction depends on two factors: the strategies agents adopt when they interact, and the wealth levels they bring to the game. The model is completely symmetric with the only difference between the agents of different populations being their objectives.

We consider the case where there are two populations of agents in which all agents from one group have as their objective, maximizing the expected profits from each interaction, while all agents from the other attempt simply to maximize the probability of surviving (i.e., not going bankrupt in) the interaction. We show that under the equilibrium dynamics, the proportions of each group in the total population must be bounded away from zero, but the balance is in favor of the survival-probability maximizers in that their numbers as a fraction of total population must always exceed 1/2, and can be arbitrarily close to unity. On the other hand, the fraction of total wealth controlled by the expected profit maximizers must also be at least 1/2, and can asymptotically tend to unity.

Equilibrium Strategy Profit Maximization Evolutionary Game Expected Profit Population Share
These keywords were added by machine and not by the authors. This process is experimental and the keywords may be updated as the learning algorithm improves.
This is a preview of subscription content, log in to check access.