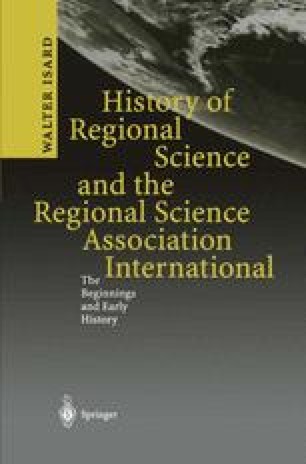 During the late 1950s interest in the Regional Science Association, the Regional Science Research Institute and the Department of Regional Science and their programs also mounted rapidly in the international community. Along with the Bellagio conference about which more will be said later, there followed in the summer of 1960 lectures and papers given by regional scientists at several scholarly meetings in Europe. These meetings took place at the Hague, Paris, Bellagio Zagreb, Warsaw, Stockholm and Lund. The newsletters of March 21, Summer 1960 and October 20, 1960 report relevant details.

Regional Science Spot Market Regional Income Growth Pole Underdeveloped Region
These keywords were added by machine and not by the authors. This process is experimental and the keywords may be updated as the learning algorithm improves.
This is a preview of subscription content, log in to check access.

Cite this chapter as:
Isard W. (2003) The Invasion of and Extensive Expansion in Europe Concomitant with the Formation of Sections. In: History of Regional Science and the Regional Science Association International. Springer, Berlin, Heidelberg. https://doi.org/10.1007/978-3-540-24751-7_6