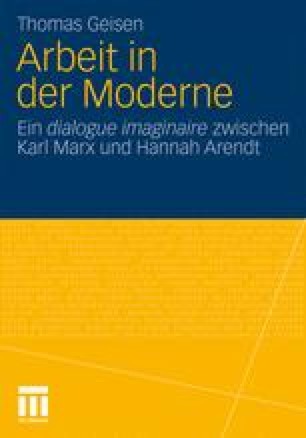 In „Between Past and Future“ (BPF) charakterisiert Hannah Arendt den Ausgangspunkt des Denkens von Karl Marx wie folgt: “Marx's inconsistencies are well known and noted by almost all Marx scholars. (…) Such fundamental and flagrant contradictions rarely occur in second-rate writers, in whom they can be discounted. In the work of great authors they lead into the very center of their work and are the most important clue to a true understanding of their problems and new insights. In Marx, as in the case of other great authors of the last century, a seemingly playful, challenging, and paradoxical mood conceals the perplexity of having to deal with new phenomena in terms of an old tradition of thought outside whose conceptual framework no thinking seemed possible at all. It is as though Marx (…) tried desperately to think against the tradition while using its own conceptual tools.” (BPF 25)