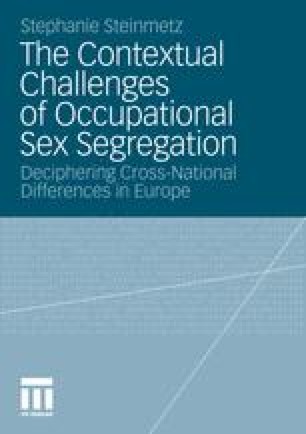 As indicated at the beginning of this study, increasing egalitarian principles in society as well as the post-industrial restructuring of labour markets have offered women access to both the educational system and paid labour. Even though ‘primary’ sex segregation ceased to exist due to these developments, the phenomenon has survived in today’s labour markets. In varying shapes, horizontal as well as vertical sex segregation can still be observed in EU Member States. The changing facets of the phenomenon seem still influenced by the two deeply-rooted ideological principles of ‘gender essentialism’ and ‘male primacy’ (Charles and Grusky 2004) which rest on women’s ‘exclusion’ as an organising principle.

Labour Market Gender Equality Gender Inequality Family Policy Contextual Challenge
These keywords were added by machine and not by the authors. This process is experimental and the keywords may be updated as the learning algorithm improves.
This is a preview of subscription content, log in to check access.