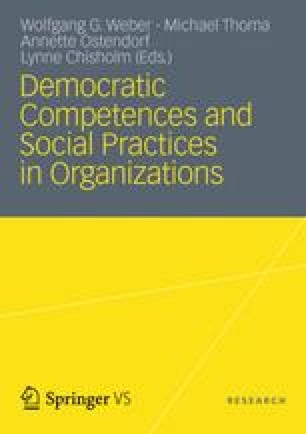 Post-democracy and Engaged Citizenship – The Case of Attac

Attac made its first appearance as an initiative promoting the introduction of a currency transaction tax (Tobin tax) in 1997. Pointing to the financial crisis in Southeast Asia, Ignacio Ramonet, editor of the French monthly ‘Le Monde Diplomatique,’ proposed to disarm the market and to create a movement for the regulation of financial markets.

Social Movement Political Elite Movement Organisation Citizenship Education Constitutional Treaty
These keywords were added by machine and not by the authors. This process is experimental and the keywords may be updated as the learning algorithm improves.

This paper relies on two research projects conducted at the University of Innsbruck, with Alan Scott as a project leader: The Political Role and Significance of Attac with Particular Reference to its Model(s) of Democracy and Potential Contribution to European Civil Society (2003–2006) and European Governance: Multi-Level or Post-Democratic? (2006–2008). Both projects were funded by the Austrian Ministry of Science and Research in the framework of its New Orientations for Democracy in Europe programme (http://www.node-research.at). As a German version of this article has already been published in the journal ‘Magazin erwachsenenbildung.at’ (Pasqualoni & Treichl 2010; see http://erwachsenenbildung.at/magazin/10–11/meb10–11_07_pasqualoni_treichl.pdf), we would like to thank the editors for their permission to include this English version in the present collection, and Sylvia Trnka for the translation.

Based on the analysis underlying the post-democracy argument (Crouch 2004), we expected to see shifts in the constitution of the political subject. There are several options of how citizens can be constructed, i.e. they can be discursively positioned and/or conceive themselves: as addressees (potential voters and audience) of political elites, as consumers or as engaged citizens. In the field of (critical) consumption, we expected to see a shift from consumer movements that address their demands to the (nation) state as market regulator towards a ‘critical consumerism’ whose actions are aimed at international institutions (e.g. corporations, NGOs, etc.) on the one hand, and at the consumer as moral agent on the other hand (e.g. fair trade, clean clothes campaigns, etc.). Engaged citizens could emerge in the social movement organisation (SMO) sector, which is increasingly characterised by professionalisation (Skocpol 2003). This might be interpreted as a response to shifting political opportunity structures under post-democratic conditions, an argument which might also apply to, and account for, recent innovations in action repertoires. The consumer and engaged citizen responses contribute to and (co)drive emerging forms of governance of the public domain that are neither strictly state nor market. Drawing on recent debates on the post-democracy argument, we thus claimed that Attac’s criticism mimics and adopts elite discourses and strategies by taking on the other’s role in EUropean politics and presenting its activists as engaged EUropean citizens. This involves affirming its role as an SMO while at the same time reframing and constantly negotiating its position within the EU’s political and media environment.