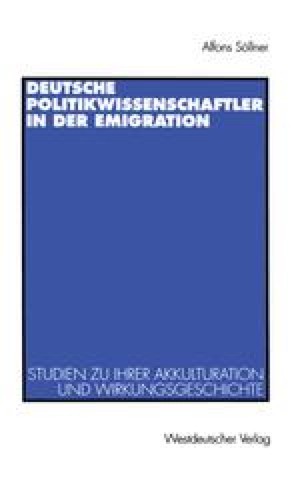 Throughout modern history manifold intellectual relations have been established between Britain and Germany and, especially since the Enlightenment, it was only natural that the import of ideas originating with persons of Jewish descent corresponded to the rising number of Jewish scholars and writers in German intellectual life. As regards the emergence of modern social sciences in the nineteenth century, the names of Marx and Engels designate a constellation of undisputed significance. Only a few years later, a similar intensive mutual fructification began between Social-Democratic „Revisionism“ and the Fabian Society — for example, it is interesting that in 1896 the still unknown Bertrand Russell made his debut at the London School of Economics with six lectures on German Social Democracy.1 English Neo-Hegelianism represents another and more traditional line of influence, which in 1918 was still strong enough as to provoke L.T. Hobhouse’s critique of the „metaphysical state“.2 But when at the same time Harold J. Laski started to construct his theory of the pluralistic state, he could do so by partially basing his anti-metaphysical thinking on eminently German historicists, such as Otto von Gierke.