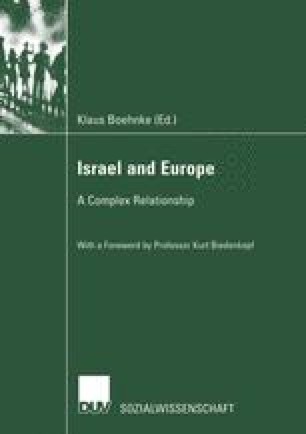 This chapter examines how existing democracies can foster the development of democratic norms in neighboring, former non-democratic enemies. Such a process of democratization should, in turn, reduce the chances of renewed hostilities in the region. The question this chapter analyzes is whether the current European model of institutional cooperation between established democracies and emerging ones, which comprised the opposing sides of the Cold War, can serve as a model for Israeli cooperation with the Palestinians.

Middle East Eastern European Country Democratic Regime Peace Process Palestinian Authority
These keywords were added by machine and not by the authors. This process is experimental and the keywords may be updated as the learning algorithm improves.

Support for this research was provided by the Konrad Adenauer Foundation. I am grateful to David Blackman, Director of the Division for Central and Eastern Europe, DG IV, European Parliament; to Gianni Palmieri, Head of the Unit for the Cooperation with Central and Eastern European Countries, Parliamentary Assembly, Council of Europe; to Jörn Stegen, Head of the Division for Interparliamentary Relations, Parliamentary Assembly, Council of Europe; and to Member of the Israeli Knesset Yossi Katz, the former Head of the Israeli delegation to the Council of Europe, for their assistance and cooperation in providing information on the various inter-parliamentary projects, and for answering continuous queries. An earlier version of this chapter appeared as “Inter-Parliamentary Cooperation: Fostering Democracy in Europe as a Model for the Middle East?”, Institute for European Studies of The Hebrew University of Jerusalem, Working Paper #2.

While Western attention and assistance has been focused largely on the creation of market economies in the Central and Eastern European countries, support is also required to help establish the political, legal and civic institutions, which are crucial to achieving the political consensus and stability required for economic reform (European Commission announcement launching the Democracy Program, 1992).

Our ultimate goal is the creation of a regional community of nations, with a common market and elected centralized bodies, modeled on the European Community (Former Israeli Prime Minister Shimon Peres, The New Middle East, 1993)