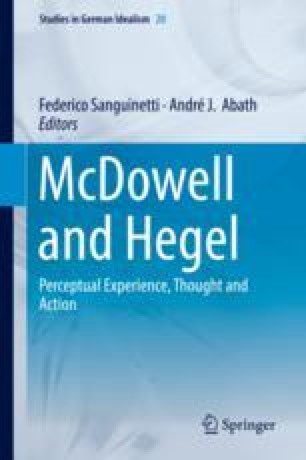 This paper will consider John McDowell’s reading of Kant and Hegel through his reaction to Allison’s reading of Kant. Kant is obviously one of the very few key modern figures. In a sense, with respect to Kant there is a before and after. Many later thinkers, including Hegel and McDowell, react indirectly or even directly to Kant. McDowell’s claim that the real shows itself commits him, as it committed Heidegger and others, to an anti- or at least non-constructivist reading of the critical philosophy. Left unclear is whether he has in mind empirical realism, which is defended by all the German idealists including Kant, or metaphysical realism that, in my view, all of them reject. Since McDowell’s reading of Hegel depends on his reading of Kant, it will be useful to concentrate on the latter. And since his reading of Kant apparently depends on his reaction to Allison’s interpretation of Kant, I will focus on that particular approach in his writings. I should indicate at the outset that my interest is less to describe the views of McDowell, Kant, and Hegel, though it includes that task as well, than to determine what they contribute to our views of knowledge, or, following Kantian terminology, cognition (Erkennen). I will be arguing that Kant, whose position is ambiguous, advances two incompatible views of cognition, and that McDowell defends the one that Kant later wisely rejects, but that Hegel defends the one Kant later put forward and that we should now also be defending.