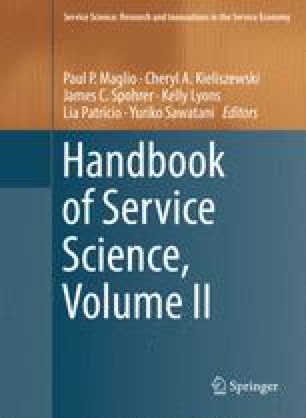 Chapter
Part of the Service Science: Research and Innovations in the Service Economy book series (SSRI)

Service science is concerned with the question of how systems can co-create value in an optimal way. In essence, innovations aim at enabling better value co-creation; but at the same time, cause disruption and tensions in the service ecosystem by challenging prevailing practices. This chapter examines the development and diffusion of a broad scale heath care service innovation—the Electronic Prescription system (eRX)—as a process of institutionalization within a service ecosystem. This case represents an innovation process that attempts to solve a major societal challenge, rationalization of medication and reduction of medication errors and abuse. This change requires commitment and adaptation by diverse actors in multiple service systems affected by the eRX, but is nearly disabled by these actors’ competing and even conflicting institutional logics. We examine how diverse stakeholders slowly move towards a convergent institutional logic as the innovation is gradually institutionalized in the broader service ecosystem, and discuss the major challenges along this process. This chapter highlights the dilemma of change in service ecosystems and highlights the role of institutions therein.

The authors would like to thank Dr. Lauri Salmivalli for commenting on the previous version of the manuscript.

This study applies a single case strategy as it aims to investigate in detail an extensive, complex multi-actor case study on the development and dissemination of electronic prescription in Finland. Case studies are considered suitable for examining complex phenomena that are not easily separable from their context (Halinen and Törnroos 2005). In this study, the case consists of the development and diffusion process of the Finnish eRX within service ecosystems that comprise different kinds of actors that are engaging in, or affected by the innovation process.

The eRX case covers the time period of 2001–2016. Main sources of data for the case study comprise interviews, public report and studies, research publications, and media materials. Thematic interviews were conducted with a range of key stakeholders involved in the innovation process. The interviews revolved around their interests and goals with regard to the eRX, and perceptions on the critical events in the process. Due to the public nature and high societal relevance of the eRX project extensive media and open archive data on the case was available. The data comprise the following:

By collecting different types of data along the development and commercialization process of electronic prescription and from different actors, we increased data triangulation (e.g. Flick 2004).

The analysis begun by developing an overview of the case by identifying the key actors involved and their activities in the innovation process. We also analysed what types of goals and perceptions each type of actors had with regard to the eRX. Next we identified the critical events along the years-long innovation process and sought for reasons for such event to have occurred, to form interpretations of the process of emerging convergence of institutional logics by the actors.