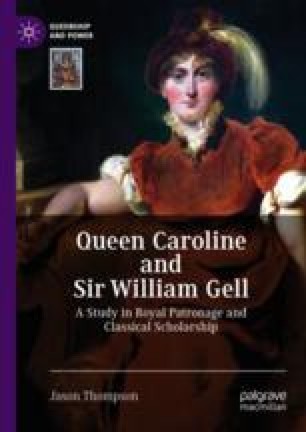 The Trial of Queen Caroline

When George became king in 1820, he resolved to be rid of Caroline entirely through an Act of Parliament that would dissolve his marriage by proving her guilty of sexual misconduct. She returned to London amid great popular acclaim to defend herself in what became known as the Trial of Queen Caroline. Gell loyally came to give strong evidence on her behalf, and the proceedings against her failed. But Caroline’s popularity, based more on hatred for the government than affection for her, evaporated. George excluded her from the Coronation, and the crowds jeered her. Deeply hurt, Caroline fell ill and the “Injured Queen,” as she called herself, died in August 1821.

Greville Memoirs Creevey Queen Caroline Affair Lord Holland West Sussex Record Office
These keywords were added by machine and not by the authors. This process is experimental and the keywords may be updated as the learning algorithm improves.
This is a preview of subscription content, log in to check access.