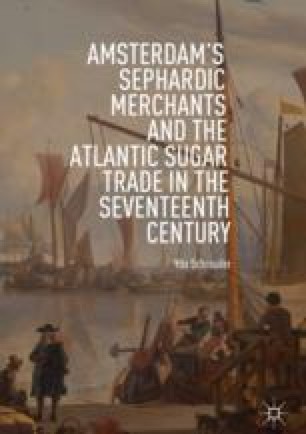 The Development of the Sephardic Jewish Sugar Trade Network

By 1650, Brazil was the largest producer of sugar in the Atlantic and Caribbean region and an offspring of the plantation-slave system of sugar production introduced by the Portuguese on Madeira and São Tomé. The Brazilian sugar production system developed swiftly during the early seventeenth century when Amsterdam became the main center of sugar refining and distribution for the European market. From 1630 to 1654, Northeast Brazil came under Dutch colonial rule during which the Sephardic merchant community gained a most prominent position in the sugar trade establishing a foothold in the Caribbean region when sugar production expanded to include French and English colonies. Dutch rule ended in 1654, at which time Sephardic merchants migrated to nearby emerging Caribbean sugar colonies or returned to Amsterdam.

Sugar Trade Sephardic Jews Sephardic Merchants Conversos Dutch Brazil
These keywords were added by machine and not by the authors. This process is experimental and the keywords may be updated as the learning algorithm improves.
This is a preview of subscription content, log in to check access.

Cite this chapter as:
Schreuder Y. (2019) The Development of the Sephardic Jewish Sugar Trade Network. In: Amsterdam's Sephardic Merchants and the Atlantic Sugar Trade in the Seventeenth Century. Palgrave Macmillan, Cham. https://doi.org/10.1007/978-3-319-97061-5_2