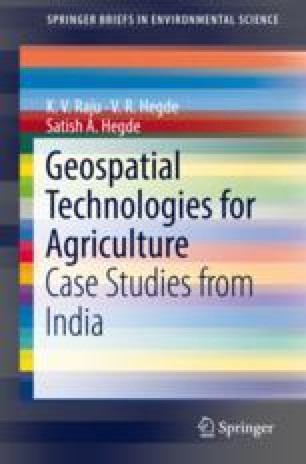 The three villages located in different agro-climatic regions are conspicuous with respect to sources of irrigation, cultivation practices, cropping pattern in different growing seasons. Khatijapura village in Karnataka is entirely a rainfed village with limited groundwater development. Crops are grown in both kharif and rabi seasons and to a limited extent in summer. Cropping in different seasons is practiced and characterized by small to medium holdings with few exceptions and the plots are fairly large. About 17% of the net sown area is under lease, contract farming and crop sharing practices. Daliparru village located in coastal plains of Andhra Pradesh has source of irrigation for kharif season. Characterized by small to medium holdings, village practices almost mono-cropping—paddy (irrigated) during kharif and pulses during rabi. Having more than 15% non-resident farmers, leased cultivation is predominant. During summer hardly any crops are grown. Jarasingha village, a part of interior coastal midland of Odisha is supported by an irrigation project. Characterized very small to small holdings practices cultivation in both kharif and rabi season while summer season cropping is limited to small extent and groundwater is being used as supplementing source. Crop sharing is practiced during kharif season and leasing is seen during rabi. Kharif is dominated by paddy while in rabi, it is mixed cropping. Kitchen garden practice is conspicuous of Jarasingha.

© The Author(s), under exclusive licence to Springer Nature Switzerland AG 2019