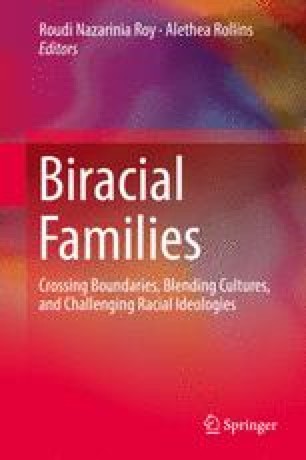 In this chapter, we first identify the major theories of family used by family scientists to aid in our understanding about families. We also identify the specific theories that have been developed to examine the biracial/multiracial individuals. We then map these theories across the typology of biracial identity (Rockquemore, Race and Society, 1(2):197–212, 1999; Rockquemore, Brunsma, Beyond black: Biracial identity in America. Rowman & Littlefield Publishers, Inc, Lanham, MD, 2008) to assess their utility in helping to explicate issues that we have identified as relevant for our discussion. Finally, we offer critiques of these theories and conclude with the idea as to how the theories can be improved to help us in our understanding of biracial/multiracial families in contemporary America.

I am mixed, black and white. My husband is black and my children are often assumed to be black. We live in a predominately white Midwest town. I met and became friends with a black parent at my child’s school. Because our children were in the same grade we found ourselves thrust together at birthday parties, school programs, and sporting events. We naturally gravitated to one another. As we spent more time together she made comments that made me feel uncomfortable. I initially dismissed them, wondering if maybe I was hypersensitive to racial comments. Yet, the more time I spent with her I felt more and more uncomfortable. I rationalized these comments to be biracial micro-aggressions. But, I wondered whether my feelings were giving me further insight into my current racial identity process. The comments made me more vividly feel my “whiteness.”

This same parent once asked me if there were any other black boys in our son’s class, I told her yes, there were 2 others. She looked at me puzzled and asked, “who?” I told her. She responded, “oh, I don’t know (him) and I didn’t count (him), he’s biracial.” This would not be the last time she referred to this child –

who has a biological white mother and black father—as not-black. When these comments were made I tried to point out that in a police line-up he would be just as endangered as her son; she disagreed. Yet, she identified my son as black. These interactions made me question my own and my children’s racial self-identifications and how we are racially identified by others. I often wonder what is the most protective and supportive advice I can give my children about how to identify themselves and our family.