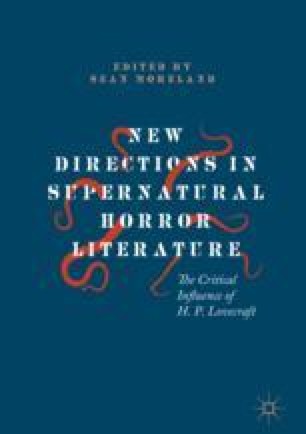 Scholars including Noël Carroll have placed the terminus post quem of the horror genre at the eighteenth century. The exclusion of the medieval period persists for two central reasons: first, if horror literature is taken as arising from a set of recognizable tropes, then these tropes largely originate within Gothic literature; second, the fear of the supernatural exploited in horror literature is particularly calibrated to a post-1750 world in which monsters are considered a figment of the imagination. Whereas Carroll excludes the Middle Ages, H.P. Lovecraft’s essay Supernatural Horror in Literature (1927) offers an avenue for interrogating the fashioning of horror within the Middle Ages. This chapter uses Supernatural Horror in Literature to bring modern theories of horror into conversation with medieval literature, particularly The Prick of Conscience (1350), a poetic treatise produced in high numbers in England, which uses memorable fragments of suffering and monstrosity to encourage penitence.

Lovecraft Supernatural Horror Horror Literature Weird Tales Cthulhu
These keywords were added by machine and not by the authors. This process is experimental and the keywords may be updated as the learning algorithm improves.

An early version of this chapter was presented at the 36th International Conference on the Fantastic in the Arts held in Orlando, March 18–22, 2015. Both the research for this chapter and travel to the conferences were made possible by a postdoctoral fellowship from the Social Sciences and Humanities Research Council for which I am extremely grateful.