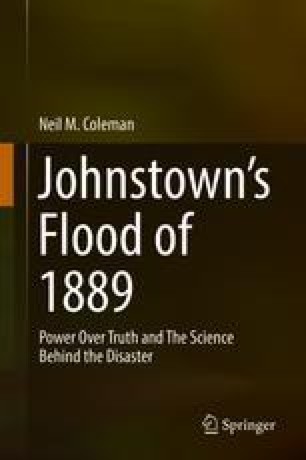 The dam as originally built with a higher crest would have resisted overtopping on May 31, 1889. Even if extremely high lake inflows had continued unabated (an unrealistic assumption), overtopping of the dam at its design height would have been averted for ~14 hrs. Given that streams peaked around noon on the day of the flood, the original dam would not have failed in 1889. The report by Francis et al. (1891) was intentionally suppressed and not released until 2 years after the flood. It was skillfully edited to include discussion favorable to both the Club members and the Pennsylvania Railroad. Such material would not have been included by the hydraulic engineers. It contains no significant criticisms of the Club. Robert Pitcairn’s fingerprints are figuratively all over the report. There is no objective proof, but it is possible the investigation report was altered after being signed and sealed on Jan. 15, 1890. It is otherwise hard to believe that eminent hydraulic engineers like Francis, Worthen, and Fteley would have signed it as published. If they had tried to appeal to higher authority, the appeal would have gone to the unsympathetic president, William Shinn, a past managing partner of Andrew Carnegie. Of the committee, only James Francis went to Chattanooga to present the results.

“If any [one] can convince me and bring home to me that I do not think or act aright, gladly will I change; for I search after truth, by which man never yet was harmed. But he is harmed who abideth on still in his deception and ignorance.”