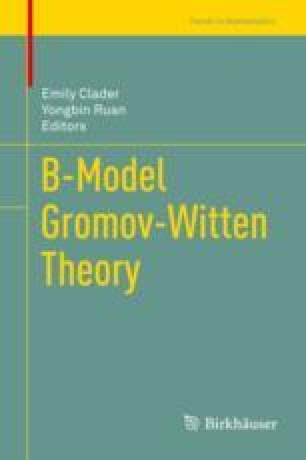 Chapter
Part of the Trends in Mathematics book series (TM)

Mirror symmetry, in general, is a correspondence between objects of a certain type (manifolds, for example, or polynomial functions) and objects of a possibly different type that exchanges the “A-model” of each object with the “B-model” of its image. This equivalence has many manifestations in both mathematics and physics, but in order to discuss any of them, one must first understand how mirror pairs are constructed. We review three such constructions—the Batyrev construction, the Hori–Vafa construction, and the Berglund–Hubsch–Krawitz constructions—and, in each case, describe the A-model and B-model state spaces that mirror symmetry interchanges.

The authors would like to thank Mark Shoemaker for his detailed and valuable comments. Thanks are also due to Kentaro Hori for answering many of the authors’ questions, and to all of the students in the course on which these notes are based, without whom many corrections and clarifications would not have been made. The authors were partially supported by NSF RTG grant 1045119.

Many more details on this topic can be found in [2].

An orbifold, speaking geometrically, is an object that is locally the quotient of a manifold by the action of a finite group. One can make this definition precise in the category-theoretic language of groupoids. From this perspective, an orbifold is a groupoid for which the objects and arrows form manifolds and the structure morphisms (source, target, composition, identity, and inversion) are all smooth.

The case on which we will focus is when X is a complex manifold and G is a finite group acting on X. Then there is an orbifold
$$\displaystyle \begin{aligned}\mathcal{X} = [X/G].\end{aligned}$$
This should be thought of as a version of the quotient that records any isotropy of the original action. The fact that the orbifold “remembers” the data of the action is clear from the groupoid point of view: the orbifold groupoid [X∕G] has objects X and arrows x → g ⋅ x for each x ∈ X and g ∈ G.
The de Rham or singular cohomology of an orbifold can be defined, but it is insufficient for capturing all of the data of \(\mathcal {X}\). One way to understand the problem is through Gromov-Witten theory. Ordinarily, in Gromov-Witten theory, there would be evaluation morphisms
$$\displaystyle \begin{aligned}{\mathrm{ev}}_i: {\overline{\mathcal{M}}}_{g,n}(Y, \beta) \rightarrow Y\end{aligned}$$
to record the images of the various marked points. In the orbifold setting, however, a morphism \(f: \mathcal {C} \rightarrow \mathcal {X}\) from an orbifold curve \(\mathcal {C}\) to an orbifold\(\mathcal {X}\) has more local data around a marked point xi than simply its image. Namely, \(\mathcal {C}\) is of the form \([{\mathbb {C}}/G_i]\) near xi for a finite group Gi, and part of the data of f is a homomorphism Gi → G. Thus, the evaluation maps should keep track not only of the images of the marked points but of the homomorphisms on isotropy, and for this reason, they should land not in \(\mathcal {X}\) but in a more complicated object.

The inertia orbifold is the image of the evaluation maps in Gromov-Witten theory, so, at least from that perspective, its cohomology is the natural object to study.

However, the grading on Chen-Ruan cohomology differs from that of the inertia stack.

That is, the degrees after shifting must sum to n.

The role of the degree shift is now clear: it makes the pairing on Chen-Ruan cohomology behave with respect to degrees like the Poincaré pairing on the ordinary cohomology of a manifold. There are further parallels between Chen-Ruan and ordinary cohomology. For example, there is a product structure, with a unit lying in the nontwisted sector whose Poincaré dual is the volume form, also drawn from the nontwisted sector. However, we only need to study the Chen-Ruan cohomology as a graded vector space in these notes.