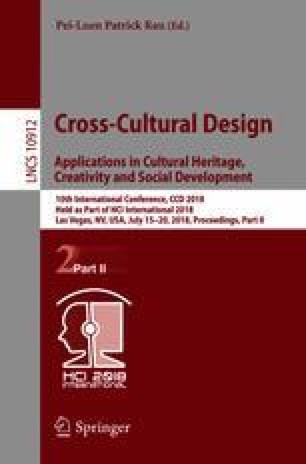 Creativity in China in the current era of globalization has become a buzzword for industry, acting as a catalyst for innovative potential and investment. However, while ‘Made in China’ has long been established, ‘Created in China’ still requires some legitimization internationally, and alongside creativity comes the need for a more nuanced, cross-cultural perspective in design and manufacturing alike. The ‘Belt and Road’ initiative is one key national plan in this larger globalization-oriented process and the high speed train, which has been referred to as China’s ‘national identity card’, plays a symbolic role in this initiative. Exporting public transport systems, e.g. high speed trains, to international markets inevitably brings with it the challenge of cross-cultural issues, due to the different cultural background of prospective passengers. The nature of creativity itself bears an intrinsic link with one’s worldview, as the act of creating is variable in different perspectives. While a particular social setting in one country or society may be historically aligned with concepts of creativity or idea-generation, that same social setting elsewhere may be viewed as a deterrent or hindrance. The importance of cross-cultural perceptions of creativity in the realm of idea-generation as related to design thus requires a thorough examination. As the conditions and need for growth in innovative thinking grows, the need to understand creativity as it is understood from a Chinese lens becomes a timely area of focus. This paper will examine the relationship between culture and creativity, as evidenced by a study on employees of a publicly owned transportation company in Mainland China.