Superschool on Derived Categories and D-branes 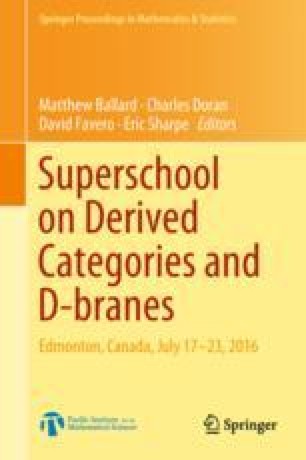 Superschool on Derived Categories and D-branes

An Overview of B-branes in Gauged Linear Sigma Models

We review the BPS D-branes in gauged linear sigma models corresponding to toric Calabi–Yau (CY) varieties preserving \({\mathscr {N}}=2_B\) supersymmetry, and their relation to stable low energy branes. The chiral sectors of these low energy branes are described mathematically by various derived categories in various parts of the CY Kähler moduli space \({\mathscr {M}}_K\). For a fixed \({\mathscr {M}}_K\), all these descriptions should in fact be equivalent in a categorical sense and we review some aspects of this equivalence from a physical perspective. This is a short summary of the results of the comprehensive work by Herbst, Hori and Page [3] with some elementary commentary.

Let us consider a general setup of having a QFT on a world-sheet (a surface) \(\varSigma \) with boundary. We may have a set of possible boundary conditions42 that we can assign to the fields of the theory, let us call this set of basic boundary conditions\(B_0\). Each connected component of the boundary \(\partial \varSigma \) corresponds to a brane (to which the component is thought to be attached) or equivalently, each boundary condition corresponds to a brane. If we have a configuration of multiple branes with a boundary condition for each of them then we can label each brane with an index, let us call the index set \({\mathscr {I}}\), and collect all these boundary conditions in the map \({\mathscr {B}}: {\mathscr {I}}\rightarrow B_0\). The indices in the set \({\mathscr {I}}\) are called Chan–Paton indices. This way each end point of the strings will carry an index of its own. More generally it may be possible, and at times necessary, to consider linear combinations of indices attached to an end point, or to allow some group to act on them.

For example, if we have N coincident identical branes then there may be a symmetry rotating those branes (among each other). Once we introduce an index for each brane, \({\mathscr {I}}= \{1, \ldots , N\}\), we can define the map \({\mathscr {B}}: {\mathscr {I}}\rightarrow B_0\) to send each index to the same boundary condition. Now some rotation subgroup43 of \(GL({\mathbb {C}}^N)\) acting on the indices in \({\mathscr {I}}\) can become a symmetry of the theory. Another way to interpret this is to imagine, instead of a stack of N branes, just a single brane with a vector bundle like structure where the fiber over each point is \({\mathbb {C}}^N\). Then an open string that ends on this brane has not only a specific position on the brane attached to its end point but also a specific position along the fiber and some subgroup of \(GL({\mathbb {C}}^N)\) can act on this position along the fiber. In this picture it is said that the end points of the open strings always have a vector space attached to them, the vector spaces being the fibers over the points on the branes where the end points are attached. These vector spaces are called Chan–Paton spaces, we will use the letter \({\mathscr {V}}\) to refer to Chan–Paton spaces.