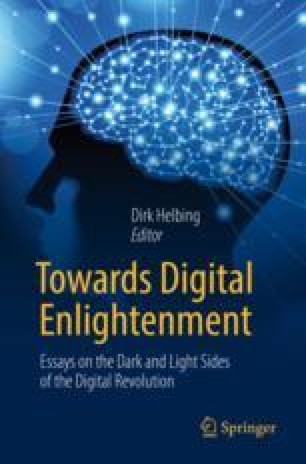 Towards Digital Enlightenment pp 25-39 | Cite as

Machine Intelligence: Blessing or Curse? It Depends on Us!

Artificial Intelligence (AI) can help us in many ways. Particularly when combined with robotics, AI can make our everyday life more comfortable (e.g. clean our home). It can perform hard, dangerous and boring work for us. It can help us to save lives and cope with disasters more successfully. It can support patients and elderly people. It can support us in our everyday activities, and it can make our lives more interesting. I believe that most of us would like to benefit from these unprecedented opportunities. So far, however, any technology came along with side effects and risks. As I will show, people may lose self-determination and democracy, companies may lose control, and nations may lose their sovereignty, if we do not pay attention. In the following, I describe a worst-case and a best-case scenario to illustrate that our society is at a crossroads. It is crucial now to take the right path.

Boring Work Citation Score Mass Surveillance European General Data Protection Regulation Powerful Machine Learning Algorithms
These keywords were added by machine and not by the authors. This process is experimental and the keywords may be updated as the learning algorithm improves.

This article was written by Dirk Helbing for Deutsche Telekom’s Digital Responsibility initiative and first published under the URL https://www.telekom.com/en/company/digital-responsibility/details/machine-intelligence--blessing-or-curse--it-depends-on-us--429070

In the past couple of years, the concept of Big-Data-driven and Artificial-Intelligence-based Smart Nations has spread around the globe. Without any doubt, these technologies offer interesting potentials to improve political decision-making and the state of the world. However, there are also a number of issues that need to be considered21:

Such systems can handle huge amounts of information, but:

“Big nudging” uses Big Data of a population, AI, and methods from behavioral economics (such as “nudging”) to manipulate people in their decision-making and behaviors.

Altogether, the problem of the above three approaches is that their validity is over-rated. They give very few people an extreme amount of power, but are very hard to control. In principle, they can be misused as a “weapon” against the own population. Using “big methods” implies the likelihood of making big mistakes. It’s just a matter of time until they will happen.