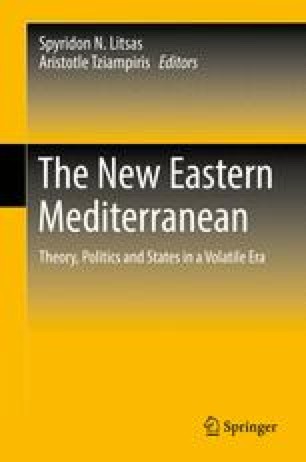 Israeli strategic thinking may be undergoing a notable shift of perspectives, which may also reflect a re-orientation and re-definition of the country’s complex and conflicted national identity. Within the last few years, Israeli leaders and officials have found it increasingly useful to think, and occasionally speak, about Israel as a quintessentially Mediterranean country. This has yet to be articulated as a coherent new concept: but from Prime Minister Netanyahu on down, the traditional frame of reference—the “Middle East” (a term which is in itself a British colonial relic)—is occasionally replaced by language which acknowledges Israel’s real place in the world (“our region”, as Netanyahu called it in Thessaloniki in June 2017) is the Eastern Mediterranean basin (Kantouris 2017). There are vital interests that Israel has in common with Cyprus, Greece, the Adriatic coast states, and Italy, as well as with Egypt—and Jordan, an “honorary Mediterranean” whose main port of trade is now Haifa, and has always been part of the EU, NATO and OSCE Mediterranean institutions.

NATONorth Atlantic Treaty Organization (NATO) Prime Minister Netanyahu NATO North Atlantic Treaty Organization Tsipras Cypriot
These keywords were added by machine and not by the authors. This process is experimental and the keywords may be updated as the learning algorithm improves.
This is a preview of subscription content, log in to check access.