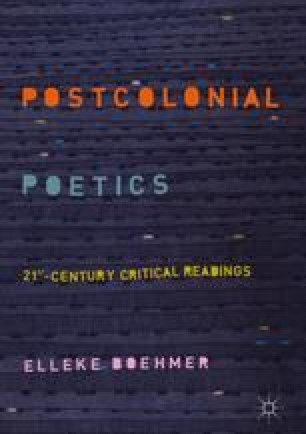 With its accent on newness contrasting sharply with chapter  5’s on repetition, chapter 6, ‘Poetics and persistence’, moves to a consideration of genealogical poetics. The discussion explores how Chinua Achebe’s writing, in particular Things Fall Apart, staked out a new field of creative and literary possibility for a younger generation of African and especially Nigerian writers: most prominently, Ben Okri, Diana Evans, Helen Oyeyemi, and Chimamanda Ngozi Adichie. Whether implicitly or explicitly, Achebe’s second- and third-generation inheritors in their different ways acknowledged his influence upon their work precisely through their poetics; specifically, through how they adopted and deployed characteristic figures from his fiction. These writers use motifs Achebe had himself drawn from Igbo oral tradition to create channels of transference from his work into their own: in particular, the device of the ogbanje, abiku, or returning baby, and the story of the cursed twins. These figures of anomaly and taboo, of either reduced or of excessive reproduction (respectively, of ogbanje or of twins), they simultaneously developed into meta-textual devices through which to reflect on their own creative practice as writers, and on the process of influence reception and transmission itself.