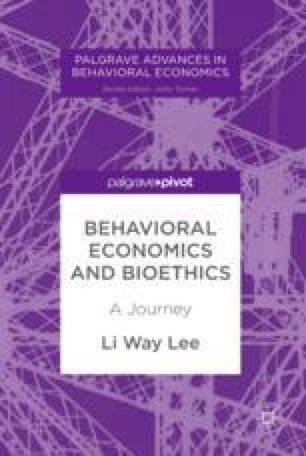 The Two Selves in My Friend Addict

To understand addiction, I employ the simplest Lotka–Volterra model of predator-and-prey interactions (Kemeny and Snell 1972; Pielou 1969; Wilson and Bossert 1971; Smith 1974). The model consists of two sets of interactions between the bad self and the good self. The bad self grows with the intensity of predation on the good self and declines at a natural rate. The overall change over time, therefore, can be described by a linear differential equation:
$$dB/dt \, = \, b_{1} BG \, {-} \, b_{2} B$$
(1)
where t is time, b 1 is the coefficient of growth due to interaction, and b 2 is the rate of fading. They all have positive values. The good self is similarly governed by a differential equation:
$$dG/dt \, = \, g_{1} G \, {-} \, g_{2} BG$$
(2)
where g 1 is the rate of natural regeneration and g 2 is the coefficient of decline due to predation by the bad self. Both also have positive values. When the rate of regeneration of the good self exceeds the rate at which it is drained by the bad self, the good self will grow in strength. If it is the other way around, the good self will wither.
The main properties of the model are depicted in Fig. 1. The addict travels on a closed loop. Once around the loop, the good self has average presence of
$$G^{*} = \, b_{2} /b_{1}$$
(3)
and the bad self has average presence of
$$B^{*} = \, g_{1} /g_{2}$$
(4)

Oscillation is not a defining property of addiction, however. An addict may have a fixed, stable proportion of good self and bad self. This can result from a slightly different model of predator and prey. Suppose that an addict’s good self rejuvenates at the “logistic” rate that is slightly lower than the exponential rate. If the good self is measured by health status, then the addict rejuvenates at less than the replacement rate. Then the good self and the bad self will converge toward a stable equilibrium. That equilibrium has the same “scorched-earth” property as that of the oscillating equilibrium. Details can be found in Lee (1988).