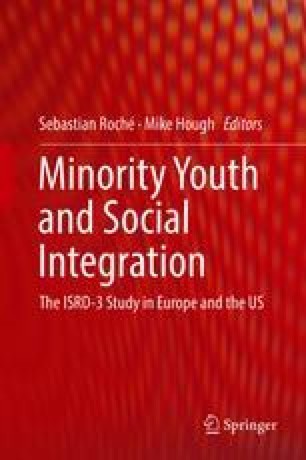 Many young people with a migrant background feel less attachment to their social environment and institutions. Their marginalized position is often seen as an explanation for their over-representation in problem behaviours such as crime, drug use or school dropouts. Migrant families live more often in disadvantaged areas because of their high levels of unemployment and economic deprivation, and these areas suffer from high crime levels. Residential turnover further weakens social bonds and social control in these areas. This chapter uses the third sweep of the International Self-Report Delinquency Study to examine whether there is a difference in the bonding of young migrants with their family, school, teacher, friend and neighbourhood compared with people who have been born within the country. It assesses whether differences in bonding explain the over-representation of migrant youth in problem behaviour as delinquency, substance use and truancy.

Self-control was measured by nine items from the self-control scale (Grasmick, Title, & Arneklev, 1993) (M = 2.79, SD = 0.64, α = 0.84). We used three subscales: impulsivity, risk tacking and self-centeredness. In the analyses we combined these three subscales to one variable self-control.

Closely related to lifestyle/leisure is whether or not the youth has friends involved in deviant or illegal behaviour. Admitting to having delinquent friend is often an alternative way of asking about one’s own involvement in delinquency. Research has shown that self-reported delinquency of friends is strongly related with a youth’s delinquent involvement (Warr, 2002). Delinquent friends is a five-item scale asking about the number of friends one has that are involved in drug use, shoplifting, burglary, extortion or assault (M = 0.78, SD = 1.15, α = 0.68).