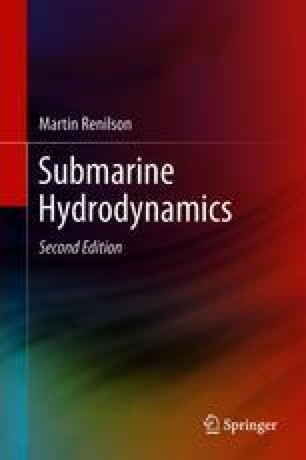 A submarine must conform to Archimedes’ Principle, which states that a body immersed in a fluid has an upward force on it (buoyancy) equal to the weight of the displaced fluid, (displacement). There are two different definitions of submerged displacement: one that doesn’t include the mass of fluid in the free flooding spaces (hydrostatic displacement), which is used by submarine naval architects, and one that does include the mass of the fluid in the free flooding spaces (form displacement), which is used by submarine hydrodynamicists. For equilibrium in the vertical plane the mass must be balanced exactly by the buoyancy force. As compressibility affects the buoyancy, it is not possible for a submarine to be in stable equilibrium in the vertical plane. Submarines are fitted with ballast tanks to enable the mass to be changed. Ballast tanks fit into two categories: those used for major adjustment of mass (main ballast tanks); and those used for minor adjustments (trim tanks). The effect of each tank is plotted and this is compared with the changes in mass and trimming moment possible during operations using a trim polygon to determine whether the ballast tanks are adequate. Transverse stability of a submarine is discussed, including particular issues that arise when passing through the free surface, when on the seabed, or when surfacing through ice. On the water surface, metacentric height (GM) is important, whereas below the surface it is the distance between the centre of buoyancy and the centre of gravity (BG) which governs the transverse stability of a submarine. Various transverse stability criteria are presented, both for surfaced and submerged submarines.

Main Ballast Tanks (MBTs) Trim Tanks Trimming Moment Compensation Tank Soft Tank
These keywords were added by machine and not by the authors. This process is experimental and the keywords may be updated as the learning algorithm improves.
This is a preview of subscription content, log in to check access.