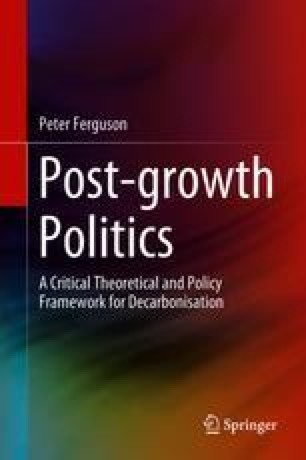 It is one thing to establish that liberalism does not prescribe a commitment to economic growth, but another thing altogether to demonstrate that liberal democracies do not face a structural imperative for growth independent of societal preferences and/or liberal norms. In contrast to agent-centred theories, structural approaches to the social sciences hold that individual agency alone provides an insufficient explanation of social and political behaviour, because all action is determined at least partly by prevailing social structures. Whilst actors can often exercise considerable agency within these structures, systemic regularities reproduce particular patterns of behaviour, often without actors being fully aware of these constraints (Callinicos in Making history: Agency, Structure and Change in social theory. Cornell University Press, Ithaca, New York, 1988). For these reasons, structural theories hold that social systems structure the preferences of actors and set limits on the kinds of preferences that can be satisfied (Giddens in Central Problems In Social Theory: Action, Structure and Contradictions in Social Analysis. University of California Press, Berkeley, California, 1979).