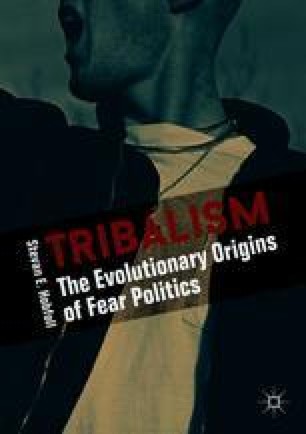 Barricade and Throw Grenades: The Entrenchment of Tribalism and Fear Politics

The tribe, defending itself, creates “truths” that fit their emotional responses. If feeling attacked, the “others” must be attacking us, evil, un-Godly, and deceiving. If the “others” say we are racist, they perhaps are the ones who are the real racists. Humans not only are good at self-deception, it is an evolutionary necessity as the illogic of the culture and how we live our own lives must be rationalized, not rational. A major thrust of this self-deception is to make the group to which we belong appear superior and the “other” to appear inferior. Psychological studies have shown that merely placing one group in blue shirts and another in red shirts, or making one group of students mock-jailers and the other mock-prisoners, will result in quickly emerging prejudices, distrust, and denigration of the out-group and elevation of the in-group.

Trumpism and European White nationalism will not necessarily migrate to fascism, but the seeds of fascism are planted and propelled by tribalism, as the genetics of tribalism propels it with its own energy. We mistake this argument to be extremist as if fascism is rare and democracy widespread, when fascism is the most common representation of government, and actually mainstream for much of the world. Democracy is fragile, has only a brief history in the world of a few hundred years, and is not well-represented in the world at any time. We also mistake the argument that Trumpism and European White nationalist movements are not fascism because we look at fascist endpoints, whereas fascism always begins by making small inroads. So, where are we on the tribalist path to fascism? The answer is scary, and more downstream on this course than even what has been called the liberal media has outlined. It is instructive to look at what fascism is and how it is orchestrated in its early moments. The tribe increasingly entrenches itself and becomes increasingly aggressive to outsiders and the forces that challenge it, including the free press, opposition parties, the courts, and the immigrant “outsider.”

Those who would give up essential Liberty, to purchase a little temporary Safety, deserve neither Liberty nor Safety.