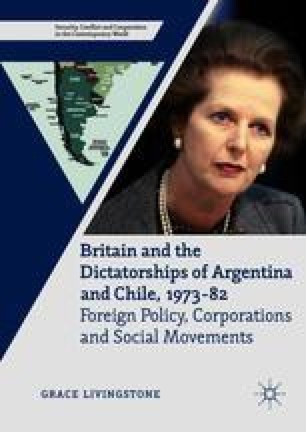 This study has shown that Foreign Office officials tried to moderate the policies of the Labour government towards Chile, repeatedly warning of the risks that punitive action might have on British trade and investment in Latin America. Nevertheless, the Labour government succeeded in introducing a set of radical policies that were starkly different from those of its Conservative predecessor, indicating that politicians did have authority over officials and that a determined government, under pressure from its own supporters, can implement its programme in the face of bureaucratic opposition. However, British policy towards the other Southern Cone dictatorships in this period—Brazil, Uruguay, Paraguay, as well as Argentina—was very different. No sanctions of any type were imposed, while trade and investment were encouraged. This suggests that politicians may have agency if they come to office determined to introduce a particular set of policies, but if they lack a clear vision and do not come under public scrutiny or extra-parliamentary pressure, the Foreign Office’s traditional, pro-business approach is likely to be adopted and trade and investment will be promoted regardless of regime type.