Memories from the Frontline 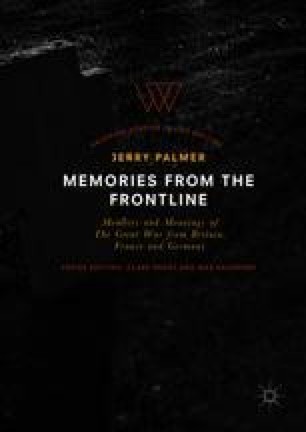 An analysis of Edmund Blunden, Undertones of War and the early partial draft belatedly published under the title De Bello Germanico. It considers the relationship between memory and retrospection in his text, as well as distinctive stylistic features, especially elaborate metaphor and irony. It considers his attitude towards the war, which was both critical and stoical while never rejecting its purpose; indeed, his conscientiousness as an officer is clear. It considers the extensive critical response to his text, which was universally favourable, singling out its authenticity; one of the main elements in the praise was his sense of proportion about the grimness of war.

Partial Draft Passchendaele Horror Elements Leeds Intelligencer Leeds Mercury
These keywords were added by machine and not by the authors. This process is experimental and the keywords may be updated as the learning algorithm improves.
This is a preview of subscription content, log in to check access.