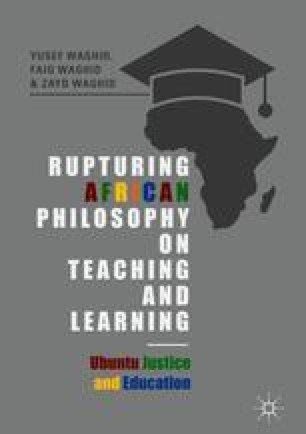 The main concern of an African philosophy of education is to be responsive to the African human condition, which is characterised by high levels of inequality and poverty, human suffering and inhumanity. The eradication of the aforementioned concerns goes along with the quest for justice, which, in the context of Teaching for Change, is of three kinds: moral justice, compassionate justice, and restorative justice. In this chapter, we examine the political and ethical thoughts of three luminaries—Nelson Mandela, Wangari Maathai and Desmond Tutu—in the cultivation of political and social democracy in order to ascertain why the aforementioned forms of justice are inextricably connected to an enactment of African philosophy of education. Thereafter, with specific reference to Teaching for Change, we show how students responded to these three forms of justice, in particular the idea of ubuntu justice that emanates from an understanding of moral justice, compassionate justice and restorative justice.