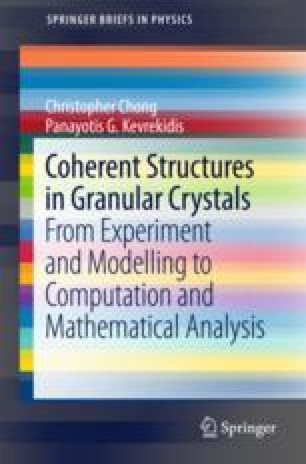 Of the three primary structures of interest in this book, solitary waves and breathers have been studied in heterogeneous granular chains, while dispersive shock waves have not. The latter represents an area of open and active research and the former is the focus of this chapter. While we will focus on traveling solitary waves and breathers (each with its own section) in this chapter, we briefly mention other work that has been done in heterogeneous chains. For example, traveling waves in granular chains with impurities can lead to transmitted and reflected waves (Sen, Hong, Bang, Avalos, Doney in Phys Rep 462:21, 2008). In chains with multiple impurities and precompression, resonant interactions can result in perfect transmission of waves with small amplitude through the impurities (Martínez, Yasuda, Kim, Kevrekidis, Porter, Yang in Phys Rev E 93:052224, 2016). This is similar to the Ramsauer–Townsend resonance in quantum physics. Chains with special heterogeneities can be used as impact mitigators (Fraternali, Porter in Mech Adv Mat Struct 17(1):1, 2010). Tapered chains have also been thoroughly studied (Doney, Sen in Phys Rev Lett 97:155502, 2006, Doney, Agui, Sen in J Appl Phys 106:064905, 2009, Harbola, Rosas, Romero, Esposito, Lindenberg in Phys Rev E 80:051302, 2009, Harbola, Rosas, Esposito, Lindenberg, Phys Rev E 80:031303, 2009), which are chains where some feature, such as the mass of the particles, changes gradually along the chain. One possible analytical approach to study such heterogeneous chains is the binary collision approximation (Lindenberg, Harbola, Romero, Rosas in Pulse propagation in granular chains. American Institute of Physics, 2011). Here, one studies the dynamics between two adjacent nodes for certain intervals of time. Disorder in granular chains has also been studied, where the tuning of the balance of disorder to nonlinearity strength can lead to subdiffusive or superdiffusive transport of energy through the lattice (Martínez, Kevrekidis, Porter in Phys Rev E 93:022902, 2016, Achilleos, Theocharis, Skokos, Phys Rev E 93:022903, 2016) (see also, e.g., (Sokolow, Sen, Ann Phys 322:2104, 2007, Ponson, Boechler, Lai, Porter, Kevrekidis, Daraio, Phys Rev E 82:021301, 2010)).

Heterogeneous Chain Granular Chain Dispersive Shock Waves Solitary Traveling Wave Precompression
These keywords were added by machine and not by the authors. This process is experimental and the keywords may be updated as the learning algorithm improves.
This is a preview of subscription content, log in to check access.