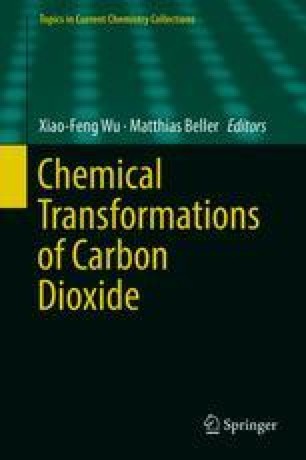 Carbon dioxide (CO2), a key greenhouse gas produced from both anthropogenic and natural sources, has been recently considered to be an important C1 building-block for the synthesis of many industrial fuels and chemicals. Catalytic hydrogenation of CO2 using a homogeneous system is regarded as an efficient process for CO2 valorization. This approach leads to the direct products including formic acid (HCOOH), carbon monoxide (CO), methanol (MeOH), and methane (CH4). The hydrogenation of CO2 to CO followed by alkene carbonylation provides value-added compounds, which also avoids the tedious separation and transportation of toxic CO. Moreover, the reduction of CO2 with H2 in the presence of amines is of significance to attain fine chemicals through catalytic formylation and methylation reactions. The synthesis of higher alcohols and dialkoxymethane from CO2 and H2 has been demonstrated recently, which opens access to new molecular structures using CO2 as an important C1 source.