How We Understand Mathematics 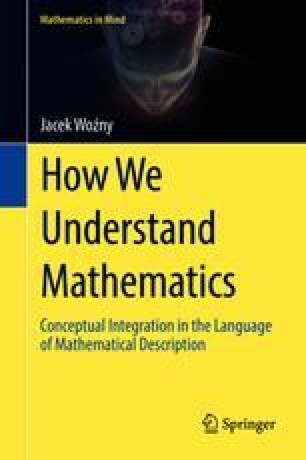 How We Understand Mathematics pp 51-59 | Cite as

Chapter
Part of the Mathematics in Mind book series (MATHMIN)

As in the previous chapter, we will continue to look for small spatial stories and conceptual blending to see how those mental patterns contribute to the effectiveness and fecundity of mathematics. The subject of focus of this chapter is mathematical mapping, described in the quotation below as “the single, most important and universal notion.” We will find that at least three small spatial stories are prompted in our handbook as a way of constructing the meaning of mapping. Or, to use the terms introduced in Sect. 2.2, three small spatial stories become input spaces in the conceptual integration network where the meaning of mathematical mapping emerges. As we mentioned above, the input small spatial stories are always easier to spot than the mostly unconscious process of conceptual blending, but we will see several traces of it as well. A rather surprising secondary conclusion of the present chapter is that the official, “rigorous” definition of mapping as a set of ordered pairs is in fact fully circular, which—taking into account the crucial importance of mapping—should result in the whole discipline being completely barren. Instead, mathematics thrives, and its effectiveness is constantly confirmed by new applications in all areas of science and industry. In the following section will be able to see how conceptual blending and its input small spatial stories contribute to these accomplishments.

Conceptual Blending Mathematical Mapping Conceptual Integration Networks Universal Notion Herstein
These keywords were added by machine and not by the authors. This process is experimental and the keywords may be updated as the learning algorithm improves.
This is a preview of subscription content, log in to check access.