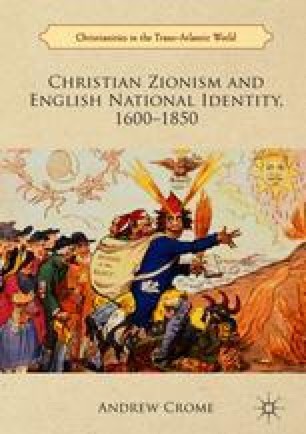 The introduction discusses issues surrounding the study of Christian Zionism and national identity in the historical context. It begins by questioning the historiography of “elect nationhood”, which suggests a likely clash between the “elect” nation and ethnic Jews. Instead, it suggests a model of “chosen” nationhood in which the nation is defined in relation to their treatment of Israel. This portrays the Jew as a positive “other”. This is analysed through a modified version of Bauman’s concept of allosemitism. It suggests an eschatological “point of encounter” in which self and other momentarily cross paths. The introduction ends by suggesting a five-point framework for understanding Christian Zionism and “chosen” national identity.

Cite this chapter as:
Crome A. (2018) Introduction. In: Christian Zionism and English National Identity, 1600–1850. Christianities in the Trans-Atlantic World. Palgrave Macmillan, Cham