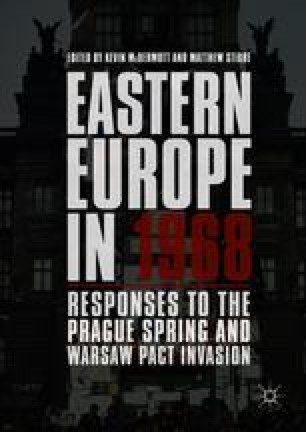 Ideological Offensive: The East German Leadership, the Prague Spring and the Warsaw Pact Invasion of August 1968

Stibbe provides a detailed analysis of East German reactions to the Prague Spring and Warsaw Pact invasion of Czechoslovakia in 1968. His main emphasis is on the ideological challenge that Dubček’s reforms posed to the GDR variant of state socialism, and he places this within the broader framework of triangular relations between East Germany, West Germany and Czechoslovakia. He explores East German leader Walter Ulbricht’s role in the broader Warsaw Pact deliberations that led to military intervention, and his reaction to Moscow’s last-minute decision not to deploy GDR ground troops on Czechoslovak territory. He also explains why the Stasi were particularly concerned about the political reliability of students, even though most students seemed passive and loyal to the regime in the wake of the invasion.