The Soils of Argentina 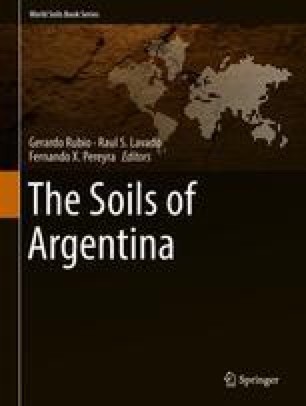 Soils of the Mesopotamian Region

The Mesopotamian Region occupies about 200,000 km2 in the NE of Argentina, which includes Entre Rios, Corrientes, and Misiones provinces. Their landscapes are characterized by gently rolling plains, whose natural land cover is a mix of open savannas or grasslands and semidry forests, and by structural lava plains in the extreme northeast of the region, mostly covered by subtropical rainforest vegetation. Additionally, lowlands and wetlands are common. The main productive activities are cattle-farming, cereal and oil crops, tea, yerba mate, and timber woods. The climate varies from humid temperate to subtropical. Fluvial process is the main geomorphic feature in the whole region. Soils of Entre Rios and Corrientes are similar to those of the Chaco and the Pampas regions, and they are characterized by horizons rich in organic matter, well developed and slightly acidic pH. These soils essentially belong to the Mollisols, Alfisols, Vertisols, Entisols, and Inceptisols orders. On the other hand, soils of northeast of Corrientes and Misiones are characterized by large accumulation of iron and aluminum oxides, as a result of the high chemical weathering basalt, low organic matter content, and acidic pH. Mollisols, Alfisols, Ultisols, and Oxisols orders are the most representative soils of this region.