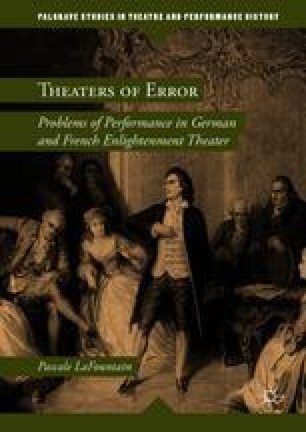 This chapter analyzes how the most important eighteenth-century theories of performance raise concerns about the reliability of the body as a natural sign. Attempts to control error in acting treatises by François Riccoboni, Rémond de Sainte-Albine, Jean Georges Noverre, August Wilhelm Iffland, Johann Jakob Engel, and Johann Wolfgang von Goethe echo central questions regarding moral control of hamartia in tragedy. Addressing such aspects of performance as oratory, declamation, dance, and the grammar of acting, the chapter proposes that in conversation with philosophical materialism, changes in theatrical practice initiate a turn to the body as an alternative location of error, previously seen as located in the soul or spirit.