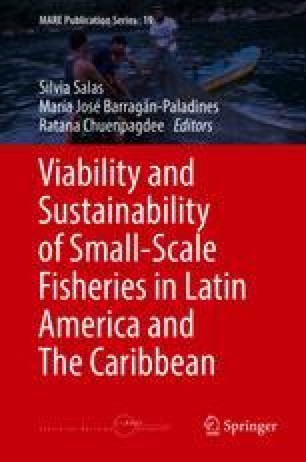 The Challenge of Managing Amazonian Small-Scale Fisheries in Brazil

Amazonian fisheries in Brazil contribute to the food security of over 20 million people who are mostly poor. However, multiple examples suggest that freshwater fish stocks may be under the same overfishing threats observed in marine fisheries, in addition to all the risks imposed by infrastructure development projects. While such threats may push some of these vulnerable people to the edge as some fisheries collapse, others will be pushed toward makeshift or elaborated solutions which can help them to maintain or restore local fisheries. In this chapter, we first adopt a theoretical approach to explore the main threats to Amazonian small-scale fisheries and their direct impacts on people’s livelihoods. We then move on to an empirical solution-based comparison between different types of co-management initiatives, using case studies developed within a protected area framework and community-based arrangements. We expect to show how small-scale fishers themselves can be the best, and sometimes the only, alternative for management. The different kinds of management broaden the application of eventual patterns, discrepancies, limitations, and solutions identified for Amazon to inland fisheries.

For SDR, details of fish and fish landing samplings are described elsewhere (MacCord et al. 2007; Silvano et al. 2009). Here, the average capture per unit effort (CPUE) was compared between reserves through a t-test. For the ER, please refer to Hallwass et al. (2013b), Lopes et al. (2011), and Silvano et al. (2014). For this reserve, we compared the median results of CPUE, the number of fish in lakes, and the abundance of fish in lakes using a Kruskal-Wallis test, with the Student-Newman-Keuls a posteriori.

We interviewed 97 fishers on basic socioeconomic information (age, residence time, main economic activity) and on their primary fishing spots, fishes caught, times of the year when the fish are more abundant, fishing technology used to catch the cited fish species, and to whom the fishers sell their catch. We also asked about which fish species had become more or less abundant in the region after the fishing agreement was implemented (formal or informal), the reasons for those changes in fish abundance, the primary fishing problems in the region, and what could be changed to improve the fisheries and the current agreement. During 14 days in the low water season and 14 days in the high water season, 15 families (initially) in each of the four communities completed a daily form describing their fishing activities (the number of fish caught per species per day and the crew size) on a voluntary basis.

To relate logCPUE to variations between periods of the year (low or high water), management regime (represented by the community), gear (gill net , hook and line, and others), and habitat (lake, river, flooded forest, stream, mixed habitats, and others), we ran a complete model with (mixed model) and without a random intercept (“fishers”). The latter performed better (L = 159.93; df = 24; p < 0.0001). As the proportion of gear used varied among communities, we also included an interaction term (community x gear) in the model. Likewise, we added a community x period interaction. For this analysis, we used the R package nlme, which is based on a Gaussian distribution. The full initial model was
$$ {\mathrm{C}}_{\mathrm{v}}=\left({\beta}_0+\mathrm{F}\right)+{\beta}_1\mathrm{V}+{\beta}_2\mathrm{P}+{\beta}_3\mathrm{G}+{\beta}_4\mathrm{H}+{\beta}_5\left(\mathrm{V}.\mathrm{G}\right)+{\beta}_6\left(\mathrm{V}.\mathrm{P}\right)\varepsilon $$
where Cv is the inferred CPUE of a given fish landing , V for community, P for period, G for gear used, H for habitat, and F for the random effect of the ith fisher, the prime symbol “.” indicates interaction terms, βs are the model estimated explanatory coefficients for each fixed effect, and ε is the residual error. We excluded eight landings that resulted in no fish, as this allowed for the residual error to have a mean of zero and to be normally distributed. Fishing events with no return were rare in all communities (IG = 0.87%; CA = 1.16%; MM = 2.54; AP = 0%), but these may be underestimated, as fishers may not have annotated unsuccessful landings. We evaluated the strength and uncertainty of models using Akaike information criterion (AIC), through comparisons between models using ΔAIC (difference between AICs; the best model has ΔAIC of zero). Akaike weights (w) were calculated to represent the relative likelihood of each model.