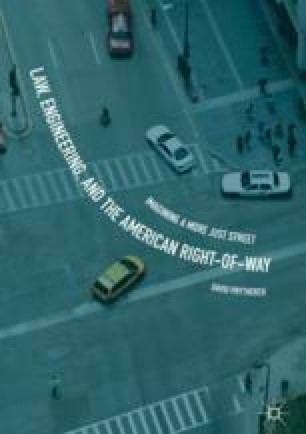 Legal Geographies of the American “Right-of-Way”

Prytherch explores the legislative frameworks that create and define streets, and how particular assumptions about mobility give shape to street spaces. The chapter traces changing legal and design assumptions about what roadways are for and whom they should serve, set in context of the historical evolution of the American street as physical and legal space for cars. It provides a critical review of the Uniform Vehicle Code, which defines the nature and purpose of the public roadway, legitimate users, and the allocation of street spaces for particular modes of travel. He analyzes diverse state statutes modeled on the Uniform Vehicle Code. Critical analysis of traffic codes in relation to mobility justice reveals how such statutes codify the asymmetrical and unjust power geometries of automobility. Mobility injustice on the American roadway is, Prytherch suggests, built upon a very firm statutory foundation.