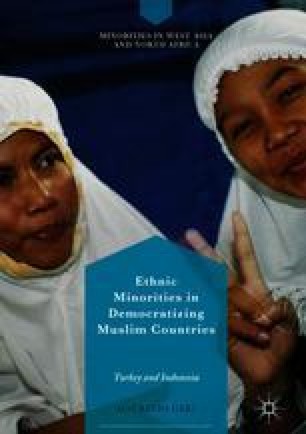 This final chapter presents the study’s conclusions, dividing them into three parts. First comes a summary of the findings to determine whether one of the hypotheses contributes more to securitization or autonomization than the others. It concludes that none of the variables is “necessary and sufficient” because none of them alone can lead to the actual outcomes. Nevertheless, one of them seems necessary, the interacting one: in both Indonesia and Turkey, low levels of ontological security correspond strongly to securitization, while high levels are associated strongly with autonomization. The second section is dedicated to meta questions asking why both assimilation and multiculturalism (of which securitization and autonomization are extreme points on a continuum) are not sufficient to resolve conflicts with ethnic minorities, in not only fledgling but also mature democracies. The final section discusses the next possible steps for future research, with rival explanations and new case studies.

Mature Democracies Ontological securityOntological Security Ethnic minoritiesEthnic Minorities Acehnese ASEAN Association Of Southeast Asian Nations (ASEAN)
These keywords were added by machine and not by the authors. This process is experimental and the keywords may be updated as the learning algorithm improves.
This is a preview of subscription content, log in to check access.