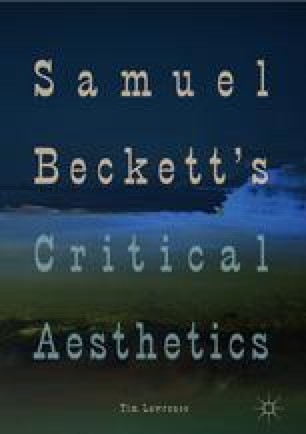 The conclusion reads how Beckett’s perennial obsessions regarding vision and representation are crystallised in the theme of unspeakability in Beckett’s poem “What Is the Word” and the figure of the eye in Beckett’s late prose text Ill Seen Ill Said. In light of the previous chapters’ detailed analyses of Beckett’s aesthetic lineages, these obsessions are shown to recall his essays’ guiding anxieties about the status of representation. The study ends by calling for an understanding of Beckettian influence modelled after vibrations and figural affinities.

Beckett’s criticism, fiction and poetry profoundly threaten received notions of representation. Their challenge to tradition lies in a carefully cultivated dialogue between aesthetic lineages recalled and revised through citation and figuration. Beckett’s uses of the figural interrogate the rarefied representation of vision integral to many of the philosophical sources his texts simultaneously invoke. The privileged status of the rational in philosophies of the Enlightenment, exemplified in Kant’s Critiques, was supported by depictions of vision as the sense most clearly connected to the intellect. By contrast, Beckett’s depictions of the visual specifically challenge the presumptions underlying the “scopic regimes” that aligned sight with the understanding.1 Evoking sight in relation to failures of comprehension, Beckett’s writing constitutes a denigration of the visual in Martin Jay’s sense; which is to say that the role of vision in Beckett’s writing is imbued in wider concerns about the status of visual representation in twentieth-century art, literature and philosophy. The revisions to Kantianism posed by overlapping strains in phenomenology, Surrealism and theories of abstract art unmoored the visual from the rational not in order to foster clarity about objects of consciousness, but in order to clear the necessary space for reflection on the limits and grounds of representation.

Beckett’s writing was knowingly imbued in these wider cultural revisions of philosophical perspectives on representation. Figures that resist fixation by the rational into knowable objects prevail in Beckett’s writing, and I have argued that through principles such as “changement” and “empêchement” Beckett’s essays on art theorise representation in terms of its resistance to arrestation by scopic regimes, such as the gaze, associated with rationality and the knowable. The tensions between resistance and revelation inherent to these essays’ depiction of representation are therefore featured foremost in the figure of the eye.

Two of Beckett’s late texts provide emblematic instances of the eye’s crystallisation of persistent concerns with the limits of representation. First of all, a line in Beckett’s last work, the poem “Comment Dire”/“What is the word” (1989) rewards consideration. As Laura Salisbury observes, the poem responds to connections between memory, mind and language, as well as Beckett’s personal experience of aphasia.2 The poem is constructed out of an accumulation of brief lines focused on the glimpse, as in the line at the poem’s middle: “folly for to need to seem to glimpse” (CP, 228, line 26; “folie que de vouloir croire entrevoir quoi” CP, 226, line 27). As so often throughout Beckett’s career, “What is the word ” is closely connected to the figural concerns of his fiction and criticism. In particular, “folly” and “folie” express a principle of irrationality, which is joined with vision by the “need to glimpse,” which in turn recalls the principles of need and necessity Beckett had evoked in relation to an artistic representation of vision in the essays “Les Deux Besoins” and “La Peinture des van Velde.” The poem’s “seeming” also observes a difference between the glimpse itself and its appearance, a difference contained in the divided notions of representation Beckett had metaphorised through the Schopenhauerian veil. Like the accumulation of veils in his essays, Beckett’s phrases have the capacity to distil layers of concepts into one crystalline image. Through such conceptual distillation, that one line in Beckett’s poem—“folly for to need to seem to glimpse”—underscores an argument central to this study: that Beckett’s writings repeatedly return to the aesthetic concerns of his essays through figures of vision, even where those texts are far removed from the circumstances in which his essays were written.

In similarly suggestive terms, the eye in Ill Seen Ill Said evokes the hesitantly seen as something unspeakable. Like the voice that rises uninterpretably and invisibly, Beckett’s late prose text draws a common connection between vision and the voice through states of invisibility and silence. At the end of Ill Seen Ill Said, the eye is evoked as an “unspeakable globe” which appears through an indescribable look following an “imperceptible tremor” (IS, 470). What could be considered failures in literary representation here manifest an engagement with unknowability as a principle expressive of the conditions of representation. Again, this expression takes place at the figural level, in figures that invoke the fragmentary relation to a wider whole by gesturing outside their limits towards the “unspeakable” and “imperceptible.” Through figures like these, Beckett’s late prose pieces, such as Ill Seen Ill Said, reflect persistent concerns expressed in his early writing. Thus the disappearing iris “engulfed by the pupil” (IS, 470) arcs back towards Mr. Endon’s eyes in Murphy, “the pupils prodigiously dilated” and “the iris […] reduced to a thin glaucous rim” (Mu, 149). This arc also picks up a telling image from Beckett’s translation in 1950 of Apollinaire’s poem Zone (1913), “Pupil Christ of the eye” (CP, 146), an image which places the figure of the eye alongside Christian iconography’s wrestling with figures of unspeakability.3 Suggestive aesthetic continuities with Beckett’s earlier writings, from pre-war prose to mid-career translations, are thus raised as well as revised by the emphasis on the imperceptible and the unspeakable that characterises Beckett’s late prose. These states are shown through figures of vision marked by their limitations—by ill seeing—while the proper expression of those limitations comes through a language that, in revealing neither subject nor object, highlights its own “failure to express”—ill saying.

My analysis of aesthetic themes surrounding the visual suggests that Beckettian intertextuality is best understood by attending to the figural evasions of Beckett’s texts, their manner of gesturing towards themes that are not simply unnamed and absent from the text but are themselves thematisations of that very unnamed and absent quality. This also leaves the question of how best to describe these patterns—the formal poetics of Beckett’s prose—which lie at the edges of representation, not to mention scholarly analysis. J.M. Coetzee has spoken usefully of philosophical affinities in Beckett’s writings in terms of a “sympathetic vibration,”4 and it is in vibrations and tremblings that the productive liminalities of Beckett’s writings are exposed. The increasing attention paid within Beckett studies to the domains of phenomenology, neurology and cognitive psychology indicates the proliferation of cultural discourses with which Beckett’s writing is recognised to have engaged. A scholarly approach to influence held in sympathy with signals of liminality—with the glimpsed rather than the grasped—would further illuminate the subtlety of this touching between the text and its outside, and would allow the invisible as well as the visible in Beckett’s writing to unfold itself the more deeply. Ultimately, this wrestling with liminality, visuality and unspeakability is fostered through the most marginal and liminal of Beckett’s texts—the fragmentary, the poetic and the critical. If we are to dream, with Clov, of “each thing in its last place, under the last dust” (CDW, 120), then we must look to where the discarded remains still wait their gathering.