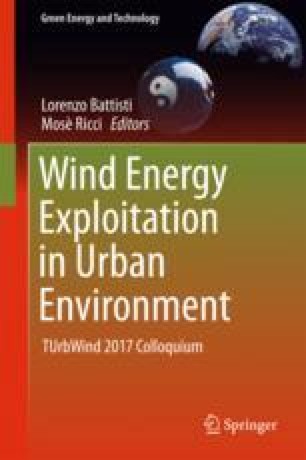 Falling energy prices and attractive governmental funding as well as the desire for energy autonomy of private households and enterprises are promoting the expansion of renewable energy generation units. Alongside photovoltaic systems, small wind turbines (SWT) represent one of the few feasible ways to generate electricity in areas with a high building density and in urban areas. In this way, electrical energy can be generated on or near buildings. In comparison to photovoltaic systems, small wind turbines face additional challenges such as the influence on the immediate area due to rotating components. While some environmental impacts are taken into account during the approval procedure, others such as vibrations and oscillations are not considered. A roof-top installation of a SWT is mainly the only feasible way to integrate wind turbines in urban areas with a high building density and guarantee a laminar flow [1]. During the operation of SWTs, many factors such as mass imbalances, aerodynamic imbalances (pitch tolerance), inclination of wind, turbulences and gusts may result in inhomogeneous torque or load, leading to vibration and oscillation of the entire system. Although all types of wind turbines are subject to oscillation, the oscillation of building-mounted SWTs must be seen critically because they can be transduced to the building via the mast. In order to take this environmental impact into account, the “Urbane Windenergie” research project (FFG-number 845184) deals among other issues with the vibration and oscillation of horizontal axis and vertical axis (Darrieus-rotor) small wind turbines. By means of accelerometers, oscillations were metrologically recorded in direct proximity to the generators of two different plants in the Lichtenegg energy research park in Lower Austria. In the first measurement campaign, oscillations were recorded on a vertical axis small wind turbine with a decoupling element installed between the generator and the mast to reduce oscillation intensity. The second measurement, on a horizontal axis turbine without a decoupling element, served to illustrate the different oscillation behaviour of these two turbine types. The evaluated measurement values indicate that the type of small wind turbine influences the emitted oscillations and that these oscillations must be considered in particular for turbines for roof assembly.