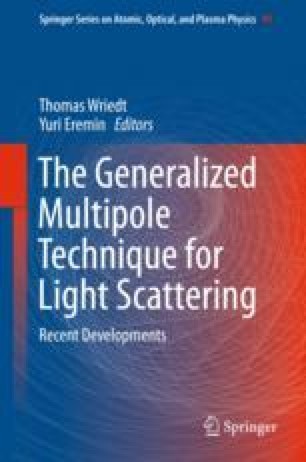 This chapter reviews the use of principal modes—states which are maximally correlated between two subspaces and hence form pairs unique up to phase factors—in solving Maxwell’s equations and analysing these solutions for nanoparticles and structures. The mathematical structure of this method allows a computationally efficient generalisation of Mie’s analytical approach for the sphere to obtain semi-analytical solutions for general geometries with smooth interfaces. We apply this method to investigate a range of single and multiple particle metallic structures in the linear, non-linear and non-local response regimes outside of the quasi-static limit.

In this appendix we compare the validity of the numerical solutions to the scattering problem calculated via three different methods: the discrete source method using QR decomposition to solve (1.4) in a least squares sense (hereafter referred to as QR); construction of the principal modes by(this approach being referred to as the QR+SVD method); and finally, purely using singular value decompositions to find the orthonormal bases and then the principal modes (referred to as SVD+SVD). In all cases, standard linear algebra routines were used to perform the decompositions and matrix products [79].

To provide a fair comparison between the algorithms we limit the rank of the output spaces for each method, via regularisation, to be the same for all methods and then study the effect of incrementing this limit. Simulations were run for two distinct particle types, a nanodisc of radius 400 nm and depth 35 nm and a nanorod of length 400 nm and diameter 35 nm, both with rounded edges. Other than their geometries, the two particles differ in the type of sources used to represent the fields. For the rod, multipole sources are distributed along the symmetry axis in the real space, whereas for the disc the sources are located in the complex space—effectively making these ring sources distributed concentrically along the particle radius. The particles were illuminated by a near field source of wavelength 720 nm comprised of a combination of electric and magnetic point dipoles located 50 nm above the particle surface. The approximate locations of the near field source, which is moved to obtain average values for some tests by using different locations and polarisations of the source, are highlighted in Fig. 1.20.

Firstly, we compare the convergence of the solutions by plotting the DSCS, i.e. the angular variation of the electric field intensity in the far field, for each of the three methods by increasing the rank from an effective minimum. These results were obtained by calculating the light scattered by the excited particles into the far field along the generatrix line, \(\phi =0\), and sampling \(\theta \) at equal intervals between the poles of the symmetry axis for the two particles at 0 and \(\pi \), as shown in Fig. 1.21. We observe that for minimal rank there is an obvious advantage to the principal mode methods, which while not fully converged show the main features of the spectrum at the correct angles. The QR solution however, for both the rod and disc particles, fails to even approximately produce these features of the solution when the rank is minimal. As the rank is increased both Principal Mode methods converge more rapidly than the pure QR solution, which requires the maximum rank considered to show full convergence for the disc, and only an approximate convergence for the rod. Note that with these particular source configurations, the upper bound on the rank obtainable for SVD+SVD and QR+SVD when no limit is imposed is almost half that observed for the QR algorithm.
Table 1.1

Average total computational time for a full solution of the scattering problem at unrestricted rank for a single wavelength near-field excitation of the disc shaped particle using an AMD Opteron 6344 processor with a 2.6 GHz clock speed. Timings are averaged over 5 runs. For the QR+SVD and purely SVD methods we highlight the time taken for the initial calculation and also the subsequent calculations for the same particle where the principal modes are read back in from disc storage

We have observed that for low rank solutions there is a clear advantage to using a method which splits the space into two subspaces, not only for the extra information about the system which this gives, but also for the accuracy of the calculations. There is also another advantage to using the principal mode methods, due to the sequential way in which the surface fields are calculated using SVD+SVD they can be stored to be used again for a different excitation of the same particle. While, for the initial calculation QR proves to be slightly quicker, as shown in Table 1.1, for multiple calculations the SVD+SVD and QR+SVD methods need only calculate the principal mode fields once and the subsequent calculations are then significantly faster by factors of \(\sim \)5 for QR+SVD and \(\sim \)7 for SVD+SVD.