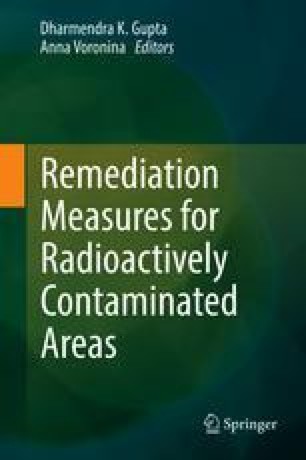 The paper gives estimated results of remediation efficiency in the radioactively contaminated territory by plowing soil. Efficiency of three tilling technologies has been estimated. The research showed the efficiency of soil plowing in terms of reduced surface contamination in the territory. Equivalent dose rate (EDR) levels and levels of β-particle flux density after plowing research areas, decreased, on average, by 56 and 87% respectively. Radionuclide migration is observed from top soil to underlying horizons. Maxima of activity concentrations in some research areas can occur in soil strata of 20–25 cm. The mechanical soil composition is found to change in remediated areas and humus content, which may point to the presence of both weathering processes and silt fraction and humus movement into the soil depth under gravity and by precipitation.

The paper also looks into the issue of radionuclide carry-over by plants onto the daylight soil surface and the impact of a plant root system type on this process, and an estimate is given to the influence of selected remediation technologies on the overgrowing process in remediated areas with vegetation. On the whole, it is found that soil plowing at a depth of 30 cm by overturning at 180о is a preferable technology followed by sowing with steppe vegetation. The paper also gives information on other remediation measures taken in areas contaminated with radionuclides in the territory of Semipalatinsk test site.