Consciousness and the Philosophy of Signs 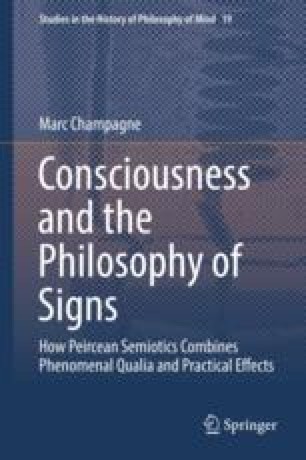 Consciousness and the Philosophy of Signs pp 1-10 | Cite as

Chapter
Part of the Studies in the History of Philosophy of Mind book series (SHPM, volume 19)

In this introductory chapter, I preview how philosophy of signs can advance current debates about consciousness. Many philosophers have urged us to distinguish between what an experience does and what an experience feels like. This distinction seems sensible enough, but it renders scientific inquiry insufficient, insofar as experimental methods can only track an experience’s detectable effects. However, Charles Sanders Peirce, the polymath who coined the term “qualia,” saw no tension in this function/quality distinction. Peirce was the founder of American pragmatism and a professional scientist, so he clearly valued tangible verification. Still, his philosophical system countenanced intrinsic qualities under the heading of “Firstness.” Since qualia are usually considered to be at odds with pragmatic verification, I set out to understand how Peirce could (or thought he could) have it both ways. The key, I suggest, is to see how we can sometimes insert distinctions between features that are always bound together. Such “prescissive” distinctions are essential to understanding how signs work. So, while semiotics is currently the least known branch of philosophy ending in –ics, a better understanding of that branch can remedy much of the current puzzlement about qualia.

The elements of every concept enter into logical thought at the gate of perception and make their exit at the gate of purposive action; and whatever cannot show its passports at both those two gates is to be arrested as unauthorized by reason.

Charles Sanders Peirce, “Pragmatism as the Logic of Abduction” lecture delivered at Harvard on May 14, 1903

Each quale is in itself what it is for itself, without reference to any other.