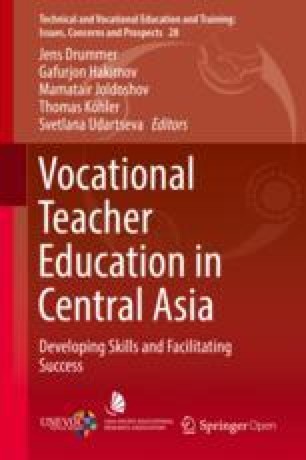 The purpose of this article is to introduce business simulations or games for up-leveling vocational education of undergraduate and graduate students. The urgency of a business simulation, as an active form for enhancing pedagogical competence, is, namely, in the fact that it allows a participant to uncover his/her identity, to learn how to take a proactive stand, to test his/her own professional aptitude, and to upgrade his/her own expertise. A business simulation is aimed at the development of professionally significant aspects of a personality.

The attempts to use business simulations resulted in enhancing the independent cognitive activity and form the professional competence of students, provided that:

The use of business simulations in the educational process of a technical higher educational institution contributes to upgrading vocational education of undergraduate and graduate students.

In the period of independence of the Kyrgyz Republic, it became necessary to develop a legal framework for functioning of the education system in the new socioeconomic and political context. The main importance and the need to reform the system of education were stipulated by the entry of the Kyrgyz Republic into the world educational space. In this regard, the government of the Kyrgyz Republic has developed the legal and regulatory framework: “Law on Education”, program “Cadres of XXI century”, “Bilim”, and others that indicate implementation of a clear state policy in the field of education.

The modern conditions of development of manufacturing techniques and technologies raise high demands to the level of professional qualifications of specialists. Formation of technical and technological knowledge and skills of students of secondary vocational schools to a large degree depends on the quality of training of the teachers of professional education.

An occupation of a teacher of professional education is one of the most significant, requiring both engineering – technical – and also the deep psychological and pedagogical knowledge and skills, certain personal qualities, a large amount of knowledge, and a high degree of technical thinking.

According to the statistics in the system of initial vocational education in the Kyrgyz Republic, only about 6% of teachers have engineering and pedagogical education, and only 11% are qualified masters of industrial training (IT). A third IT masters have a qualification category, which is below the category of school graduates. Many teachers of general technical and special disciplines have only technical education.

The development of higher education in the world imposes the new increased requirements to the training quality of the personnel that necessitates improving radically the study and educational work in the educational institutions, to enhance its efficiency, to use new methods and teaching aids. In many respects, the solution of this problem depends on the qualification of the teachers of vocational education, their competence, and skills. In the current situation, a vocational training teacher becomes a key figure in providing vocational education.

11.2 The Analysis of the Business Simulations Use in Training of the Teachers of Vocational Education

Any human activity, including a training activity, happens due to influence of the number of factors, the main of which are the needs. The needs cause the reasons of acts and behavior, which the psychology calls motives. The main purely human need is a cognitive need.

A number of errors, sometimes typical and expected ones, often accompany professional formation of a young specialist. How to avoid them?

To answer this question, it is necessary to indicate the main weaknesses in the training of specialists: lack of theoretical and practical training, the duration of the period of adaptation to the professional activity, and inability to solve professional problems in the extreme conditions.

A content area in business simulations is to imitate specific conditions and dynamics of production, as well as the actions and attitudes of people employed there, in other words, to reconstruct or to simulate two realities – the production processes and the structure of the professional activities of specialists.

According to the experts, in a higher educational institution, the game must represent an independent informative activity of a student in the framework of specific “rules and conditions aimed at searching, processing, and mastering educational information to make decisions in a problem-based situation”. Thus, the game becomes a learning environment for intellectual development of students because of providing a dynamic thinking and memory efficiency in the process of mental and cognitive activity (Platov 1991, p. 192).

A business simulation cannot be the basis of a training. It can complement theoretical material and act as a final stage of mastering of the training material.

As one of the most active methods of a training, a business simulation has the following features: activation of thinking and behavior of the participants, a high degree of involvement in the process of the game, and mandatory interaction between the participants and the game materials.

Meanwhile, the advantage of the business simulation consists precisely in the fact that in a short period of time, several conflict situations can be concentrated, which need to be resolved. A student is guided by the rules while fulfilling the game actions. The rules are an essential element of a business simulation. Two types of rules are distinguished – the rules that limit actions of players and the rules-sanctions that punish players for misconduct – but these rules should be set by the game players themselves, and they must comply with them. If the rules are beam down, the game will not work (Shetinina 2013, pp. 15–24).

A lesson with a business game usually consists of the following main parts:

The experience shows that adaptation of the experts in business simulations is more effective than in the actual practice, as there is an opportunity to intensify professional relations, to pay attention to certain aspects of the professional activities, for example, to show typical errors in performing certain actions (Abramova and Stepanovich 1999, p. 192).

The skills and knowledge, which are acquired during several months in practice, can be acquired during several lessons in a higher educational institution. In this case, the adaptation has more creative nature, because a student have almost no psychological barriers and fear for making mistakes, and that is important; all the student’s activities are subject to a deep, qualified, and friendly analysis.

The contents of the subject matters “Methods of professional training”, “Methods of teaching special subjects”, and “Basics of pedagogical excellence” were analyzed in order to find an effective system for training of the teachers of vocational education.

To form educational, social, and organizational competencies, we have developed the business simulations “Lecture”, “Analysis of a lesson”, “Meeting with employers”, and “Protection of teaching materials” and introduced them in the educational process among students in the field of vocational education of the technical higher educational institutions.

The experiments on the use of the business simulations resulted in enhancing the independent cognitive activity and form the professional competence of students provided that:
The self-analysis of the results of the business simulation was carried out based on the outcomes of the survey. After processing the outcomes of the questionnaires, we found that:

The purpose of the instructional techniques for forming a game team is to make an individual activity inappropriate and to approve the necessity of collective and group work in the eyes of the players.

A game team formation is closely linked with the problem of involving players in the game: no problems occur when the objectives of the game originally attract interest of the players and when the game players are genuinely interested in being acquainted with a new method of learning.

The main problems encountered during the game were:
While conducting the business simulation, we have identified a number of pedagogical effects:

Eventually, the use of business simulations in the educational process of the technical higher educational institution contributes to the advancement of training of bachelors and masters in the field of vocational education.

The proactive attitude of the students in the business simulations becomes apparent, bears so much long character, but not sporadic one, that the very atmosphere of the business simulation makes its participants to be active. First and utmost, while designing a game, it is necessary to create a model of the real socioeconomic system in the structure of which managers or specialists will elaborate managerial decisions and acquire the necessary skills.

Open Access This chapter is licensed under the terms of the Creative Commons Attribution 4.0 International License (http://creativecommons.org/licenses/by/4.0/), which permits use, sharing, adaptation, distribution and reproduction in any medium or format, as long as you give appropriate credit to the original author(s) and the source, provide a link to the Creative Commons license and indicate if changes were made. The images or other third party material in this book are included in the book's Creative Commons license, unless indicated otherwise in a credit line to the material. If material is not included in the book's Creative Commons license and your intended use is not permitted by statutory regulation or exceeds the permitted use, you will need to obtain permission directly from the copyright holder.