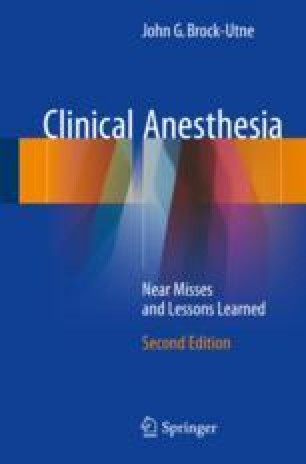 A 55-year-old man (70 kg, 5’11”, ASA 2E) is admitted for emergency laparotomy following a stab to his abdomen. He is hemodynamically stable. He has no past history of note except a previous stab, again to his abdomen. His previous anesthesia and surgery have been uneventful. He arrives in the operating room with a 20G IV in his hand which is seen to work well. He does not like needles, and since he is considered stable, routine rapid sequence induction is initiated without any problems using the 20G. After induction, a 14G peripheral IV is placed in the right hand and attached to a Hotline® Fluid Warmer (SIMS level 1 INC., Rockland, MA 02370) for possible rapid IV fluids and blood transfusion. A central vascular line is inserted into the right subclavian vein with one stick, and no problems are encountered. The CVP is running well, and you aspirate back the blood easily from all lumens. At the surgeon’s request, the left arm with the 20G IV is tucked alongside the patient’s body. The right hand with the 14G IV is placed “out” at 90° to his body. The surgery commences and repairs of both small and large intestines are needed. Four hours into the operation, the urine output decreases. The surgeon tells you that he cannot feel very little urine in the bladder. The CVP, as measured with your triple lumen IV set, is within normal limits. Through the 20G IV (the IV is now seen to be working “great”), furosemide 10 mg is given and a dopamine drip is commenced. Thirty to forty minutes later, no improvement in urine output is seen. The patient is still cardiovascular stable with a normal CVP, but the urine output is only 3 ml in the last hour. You give more furosemide and increase your dose of dopamine again via your 20G IV. However, 30 min later, there is still no improvement in urine output.