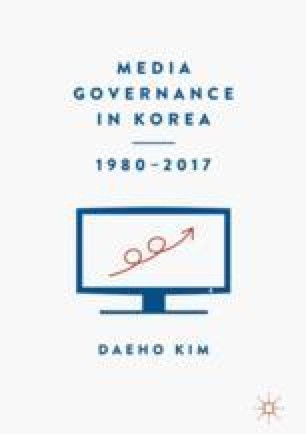 In summary, the media in Korea has been greatly expanding since the decade of the 1980s. In addition, traditional media has shifted to the Internet and mobile-oriented media. Media governance has changed from a government-centred method to one involving various stakeholders, including both the private sector and civil society. The value of media governance in Korea has undergone a path of development through the circulation of market interest and public interest in the media. Moreover, media governance has broadened in scope, such that entities like industry and civil society interacted together with government. Industrialization, democratization, and informatization solidified this system.

Media Governance Telecommunications Area Media Companies Media Convergence Mobile Broadcast
These keywords were added by machine and not by the authors. This process is experimental and the keywords may be updated as the learning algorithm improves.
This is a preview of subscription content, log in to check access.