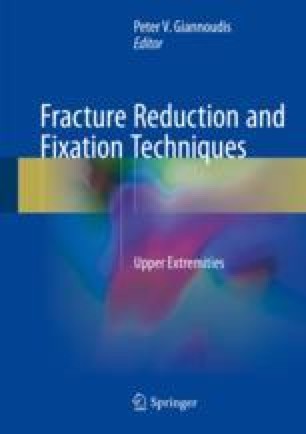 Galeazzi fracture or otherwise known as “fracture of necessity” is a fracture of the distal radius with disruption of the distal radioulnar joint (DRUJ). It is called fracture of necessity because in adults its management necessitates the surgical treatment with anatomic reduction and stable fixation of both the radial fracture and the DRUJ. It is well established that nonsurgical management of this highly unstable fracture results in malunions with significant functional deficit and unsatisfactory results. In this chapter reduction and fixation of Galleazzi fracture is discussed.

Galeazzi fracture or otherwise known as “fracture of necessity” is a fracture of the distal radius with disruption of the distal radioulnar joint (DRUJ). It is called fracture of necessity because in adults its management necessitates the surgical treatment with anatomic reduction and stable fixation of both the radial fracture and the DRUJ. It is well established that nonsurgical management of this highly unstable fracture results in malunions with significant functional deficit and unsatisfactory results [1]. The fracture of the radius that involves the distal third of the bone is the result of the axial loading of the forearm in either supination or rotation. A short oblique fracture with apex anterior (volar) [2] (Fig. 22.1a, b) or apex posterior (dorsal) [3] (Fig. 22.2a, b) angulation of the radius occurs, respectively. The torsional mechanism of the injury results to concomitant disruption of the DRUJ and injury to its primary stabiliser (triangular fibrocartilage complex—TFCC) [4].

The above translates into the characteristic radiographic appearance of the Galeazzi fracture, i.e. a short oblique distal third ulnar fracture and a subluxation/dislocation of the DRUJ. Most of the times, the latter is obvious on the anteroposterior and true lateral radiographs of the wrist, but when this is not the case, indirect radiographic signs of DRUJ injury include the fracture of the ulnar styloid and the shortening of the radius more than 5 mm. A contralateral wrist radiograph for comparison is always helpful in equivocal cases [5].

General anaesthesia is preferred over regional due to potential masking of postoperative compartment syndrome when the latter is used.

The patient is positioned supine on a standard table, and the affected arm is placed on a radiolucent hand table. The table is placed in such a way that unobstructed intraoperative imaging can be performed. This usually requires rotation of the table 45° or 90° so that the affected extremity is placed at the centre of the operating theatre. A tourniquet is placed, and the affected extremity is prepped and draped following the administration of intravenous antibiotics. The image intensifier is brought from the top or the side of the patient.

Closed reduction manoeuvres are not used for Galeazzi fractures.

For the reduction of the ulnar styloid, a pointed reduction clamp or a stay suture (e.g. No 1 Vicryl) is needed.

The volar approach to the radius is the workhorse for the surgical treatment of Galeazzi fractures. This can either be a flexor carpi radialis (FCR) sheath or the classic Henry’s approach. The latter is used when the radial fracture is more proximal. For the FCR approach, the volar sheath of the FCR tendon is identified after the skin incision which is centred over the short oblique radial fracture and measures 10–12 cm (Figs. 22.3 and 22.4). Then the FCR tendon is retracted ulnarly (Fig. 22.5). The dorsal (deep) sheath of the investing fascia is identified and incised (Fig. 22.6). The flexor pollicis longus tendon is identified and retracted ulnarly (Fig. 22.7). This manoeuvre protects the median nerve. The fracture of the radius is then visible (Fig. 22.8).

The dorsal and direct radial approaches to the radius are not indicated for the surgical fixation of the Galeazzi fractures. The former has been associated with soft tissue complications (irritation/attrition of tendon with risk of postoperative rupture), whilst the latter is technically more challenging since it requires mobilisation of the brachioradialis tendon and the sensory branch of the radial nerve.

The fracture is identified, and it is debrided from soft tissue debris and hematoma. A dental pick is an instrument quite useful for manipulation of fracture fragments whilst minimising the soft tissue damage. The facture can also be manipulated with pointed reduction forceps, and debridement is performed using a small curette (Fig. 22.9). Minimal dissection of the periosteum (especially in areas of infolded periosteum) is performed along the edges of the fracture. The fracture fragments are exposed sufficiently enough without stripping the periosteum and violating the surrounding soft tissue envelope.

The fracture fragments are mobilised using small serrated reduction clamps (Fig. 22.10). The fracture is then provisionally stabilised with a pointed or serrated clamp. Galeazzi fractures have usually short oblique configuration, and a Howarth’s elevator or a small Hohmann retractor can be used to lever the fracture with intra-focal manipulation. Combinations of longitudinal traction along with twisting of the fragments represent useful manoeuvres in fracture reduction. The surgeon should keep in mind that the fracture was produced by a torsional moment to the bone, and reversing the mechanism of injury helps reducing the fracture. Pure traction or pure rotation of the fracture fragments is not enough for reduction.
At that stage the fracture is inspected, and the plan for anatomic reduction is confirmed. This means that the preoperative radiographs and the intraoperative fracture configuration are correlated, and the plan for anatomic reduction and fixation either with a lag screw and neutralisation plate or with plate used as a reduction tool is confirmed. When a lag screw is utilised, the correct entry point and the trajectory of the screw are of paramount importance. In order to achieve the above, the three-dimensional configuration of the fracture has to be taken into account. Most of the times, a 3.5 mm lag screw is sufficient, but in short oblique fractures, a 2.7 mm lag screw is sometimes useful in achieving the compression without propagation of the fracture ends (Fig. 22.11a–c). At that stage intraoperative fluoroscopic confirmation is obtained with particular attention paid at the DRUJ. Good quality true AP and lateral wrist views are obtained.
A neutralisation plate is then applied taking into account the natural bent of the radius which has “two concavities”, one facing volarly and one facing ulnarly (Figs. 22.12, 22.13 and 22.14). Bending the plate on the sagittal plane allows for proper sitting of the plate on the bone. An 8 hole 3.5 mm DCP is usually sufficient to support a short oblique fracture, but occasionally a longer plate is necessary. Three bicortical screws proximally and three screws distally are needed for adequate fixation. In the vast majority of cases, the use of locking plates is neither needed nor advocated. Fluoroscopic confirmation is again obtained.

When lagging of the fracture is not possible due to the configuration of the fragment (transverse, short oblique <30°), then the DCP plate should be applied in compression mode after provisional stabilisation of the fracture. In short oblique fractures, this can be done by initially fixing the plate in one of the bone fragments in such a way that an obtuse angle (axilla) between the plate and the bone can be created. This is followed by re-apposition of the other fragment and eccentrically loading the screws and thus compressing the gap providing absolute stability. In transverse fractures, the plate is fixed to one fragment, and then the other fragment is reduced onto the plate. Maintenance of the reduction using serrated clamps is needed in this situation.

After the fixation of the radius, the DRUJ is checked and classified as reduced/stable, reduced/unstable or irreducible [5] (Fig. 22.15). Reduction and stability are tested both clinically and fluoroscopically. Intraoperative true AP and lateral fluoroscopic views are obtained without excessive forcing the wrist. If undue force is applied, the DRUJ can be potentially reduced even with existing soft tissue interposition. After its reduction, the stability of the DRUJ is tested, and in supination and pronation, instability is defined when gross translation of the ulna in relation to the sigmoid notch is observed.

Summary of Tips and Tricks-Pitfalls